Watch: Alia Bhatt Says "I Love You" To Ranbir Kapoor From Filmfare Stage

Filmfare Awards 2019: Alia Bhatt referred to Ranbir as her "special one" when she took the stage at the awards show, where she won the Best Actress Award for her role in "Raazi" on Saturday night. 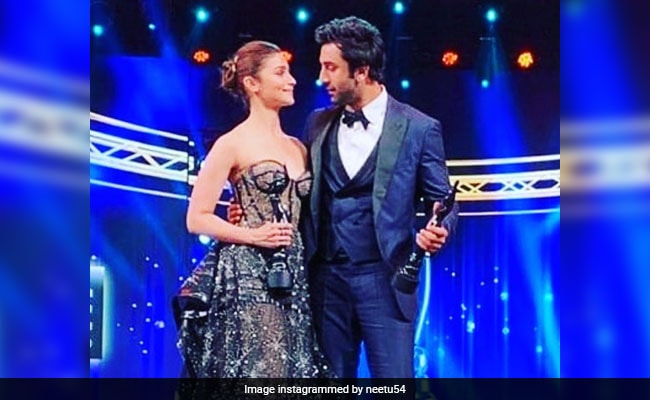 A kiss and an "I love you" from Alia Bhatt to Ranbir Kapoor at the 64th Filmfare Awards got their fans on social media talking about their rare public display of affection.

Alia Bhatt referred to Ranbir as her "special one" when she took the stage at the awards show, where she won the Best Actress Award for her role in "Raazi" on Saturday night.

In a video that is doing the rounds on social media, Alia Bhatt can be seen saying "I love you", while Ranbir can be seen blushing over Alia's special gesture.

Alia Bhatt- I love you (from stage) after winning award, while Ranbir Kapoor is all smiles❤😇#FilmfareAwards2019pic.twitter.com/UPHZFzvV5L

Ranbir Kapoor bagged the Best Actor honour for his role in "Sanju". Just when his name was announced as the winner, Alia Bhatt, who was seated next to him, gave him a side hug and a kiss on the cheek.

After that, Ranbir Kapoor turned to his other side where his "Sanju" co-actor Vicky Kaushal was seated. The two actors hugged and kissed as well.

Ranbir Kapoor's mother Neetu Kapoor took to Instagram to celebrate their victory, and wrote: "And moments like these make you forget all the stress. Congratulations, so proud and happy."

Alia Bhatt and Ranbir Kapoor will be seen sharing screen space in the upcoming film "Brahmastra".