Fighter: Deepika Padukone And Hrithik Roshan's Film Is "Ready For Take Off." See His Post 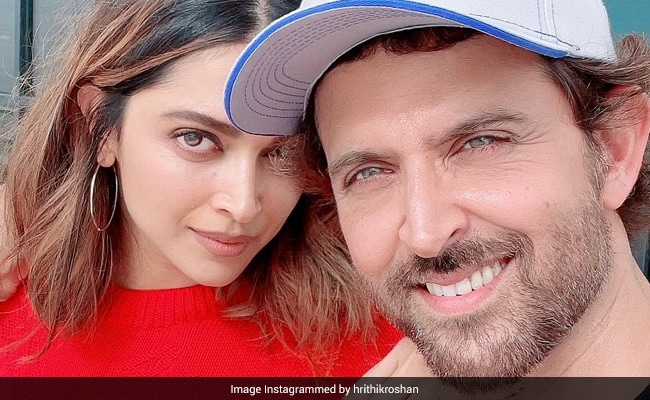 Hrithik Roshan shared an update on his forthcoming project Fighter, co-starring Deepika Padukone and we can't keep calm. The actor shared a set of pictures on his social media handle on Friday evening. In the picture, the co-stars can be seen happily posing together. The other shot features Hrithik and Deepika posing with the film's director Siddharth Anand. An excited Hrithik Roshan captioned his post: "This gang is ready for take off." He accompanied the post with the hashtag #Fighter. The film marks Deepika Padukone and Hrithik Roshan's first collaborative project. Hrithik has previously worked with Siddharth Anand in the 2019 film War, co-starring Tiger Shroff and Vaani Kapoor.

Fighter, slated for a 2022 release, will be "India's first aerial action franchise." The film will be designed for a global audience and it will be shot at locations across the world. The film will collaboratively be backed by Viacom18Studios, Mamta Anand, Ramon Chibb and Anku Pande.

The project was announced on Hrithik Roshan's birthday in January this year. Announcing his association with the project by sharing a teaser of sorts, the actor tweeted: "Presenting a glimpse of the MARFLIX vision as Fighter! Looking forward to my first flight alongside the exceptional Deepika Padukone. All buckled up for this Siddharth Anand joyride."

On the work front, Deepika Padukone has a busy schedule ahead, with several releases lined-up. She awaits the release of the sports film '83, in which her husband Ranveer Singh plays the role of cricketing legend Kapil Dev. The actress will also star in Shakun Batra's untitled film with Ananya Panday and Siddhant Chaturvedi. She also has a film with Prabhas. The actress was last seen in Chhapaak, which she also produced. She will co-star in the Hindi remake of The Intern, alongside Amitabh Bachchan. Hrithik Roshan was last seen in the high-octane action film War.