"It looks like the end of an era... Serious nostalgia hit me all again," wrote Naga Babu 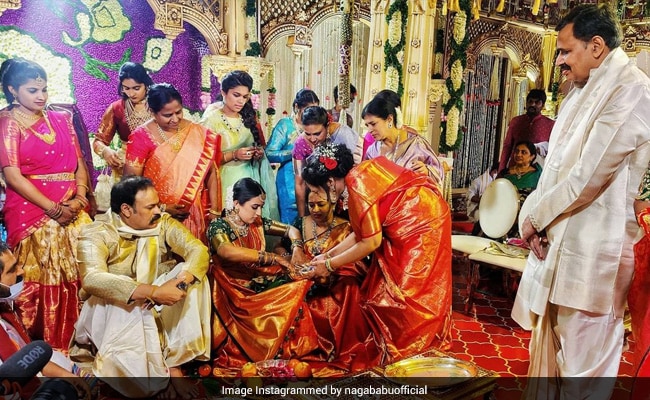 Veteran actor-producer Naga Babu shared a glimpse from his daughter Niharika Konidela's wedding, which took place in Udaipur's Umaid Bhawan Palace on Wednesday. An emotional Naga Babu shared a picture from the wedding ceremony, in which the bride can be seen dressed in a red saree. He chose the best set of words to describe his emotions and wrote: "It looks like the end of an era... Serious nostalgia hit me all again... It feels like the first day of her school... Just that she won't be returning by evening. It took years to make peace with the fact that my baby girl is all grown up to go to school and I can't play with her 24 x 7... Just donno how long it will be this time....'Only time will decide.' Already missing you Niha thalli."

Earlier, Naga Babu gave a sneak peek into the sangeet ceremony.  The video also featured Ram Charan and his brother having a chat at the function. "The sneak peek...Just a taste of what's coming next!" wrote Naga Babu.

On Sunday evening,  Naga Babu   posted a picture of Niharika along with her uncle Chiranjeevi and he captioned the post: "His love transcends all the borders of time and age. His smile transforms every event into a celebration. The day of the bride." Here's the post we are talking about:

Actress Niharika Konidela, also a producer, is the daughter of Naga Babu and Padmaja Konidela. She made her acting debut in the year 2016. Niharika got engaged to Chaitanya JV earlier this year, in the presence of her family members.