Father's Day: Some actors shared throwback pictures while others opted for recent ones which were equally good 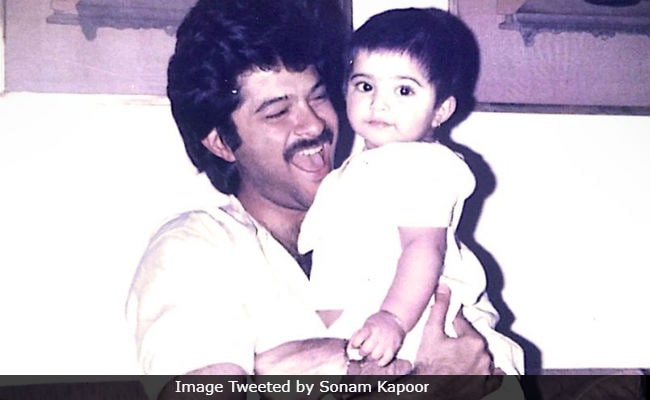 New Delhi: Its Father's Day today and Bollywood celebrities have bombarded social media with throwback pictures and heart felt messages for their respective fathers. On this special occasion, we have handpicked a few of our favourite throwback moments shared by Bollywood actors - from Ranbir Kapoor's "awkward teenager moment" with dad Rishi Kapoor, to Sonam Kapoor's "oh-so-adorable" picture with her "main man" Anil Kapoor and the list cannot be complete without a mention of Bobby Deol's "blast from the past" picture featuring Dharmendra and brother Sunny Deol. Kajol, Abhishek Bachchan, Preity Zinta, Karan Johar and Esha Deol also shared their favourite old photos with their Dads on the Internet.

These pictures of Bollywood celebrities reminiscing over old days with their fathers are pure gold.

Happy Father's Day to my main man! To have you as a role model has been my greatest gift and I wish I had words to tell you how much I love you daddy. @AnilKapoor#JaaduKiJhappipic.twitter.com/OLKT35QPxn

What more could I ask for when you gave me wings to fly? Happy Father's Day Baapu

Blast from the past!! Papa, Every day is a Father's Day with you around ... I am so blessed to have a father like you!! #happyfathersday

Filmmaker Karan Johar wrote a moving note for his father Yash Johar, who he lost to cancer in 2004. He wrote: "He taught me the strength of goodness....the overemphasis on success and even the positives of failure....I miss seeing him but I talk to him every day! He is my morning prayer."

He taught me the strength of goodness....the overemphasis on success and even the positives of failure....I miss seeing him but I talk to him everyday! He is my morning prayer....#happyfathersday

Not a throwback picture per say, but Anushka Sharma's million-dollar picture with her father, from her engagement ceremony, sent the Internet into a meltdown.

Throwback pictures are just one aspect of the Father's Day celebrations, celebrity dads also shared adorable pictures from the recent past and we assure you, some of the pictures will definitely make you go aww. Sanjay Dutt shared a collage with his twins Shahraan and Iqra (with Maanyata) and his daughter Trishala (with his first wife Richa Sharma). He wrote: "Blessed to be a father to such amazing kids!"

Blessed to be a father to such amazing kids! Wishing Happy Fathers Day to all dads out there. #HappyFathersDay

Raazi actor Vicky Kaushal also shared a picture from the sets of his upcoming film Sanju and wrote: "My source of inspiration. My pillar of strength. Happy Father's Day Papa Kaushal."

My source of inspiration. My pillar of strength. Happy Fathers Day Papa Kaushal! @kaushalsham My #jaadukijhappi moment with Dad on the sets of #Sanju. Thank You @hirani.rajkumar Sir for giving us this moment that we'll cherish forever

Promoted
Listen to the latest songs, only on JioSaavn.com
Though Aayush didn't share his picture with son Ahil so his wife Arpita Khan Sharma did the needful:

Dearest Papa , Happy Fathers Day! Thank you for being the best papa is the whole wide world, i love you very much. Love Ahil @aaysharma