As of now, Zoya has not reacted to Farhan's post but we are eagerly for her response 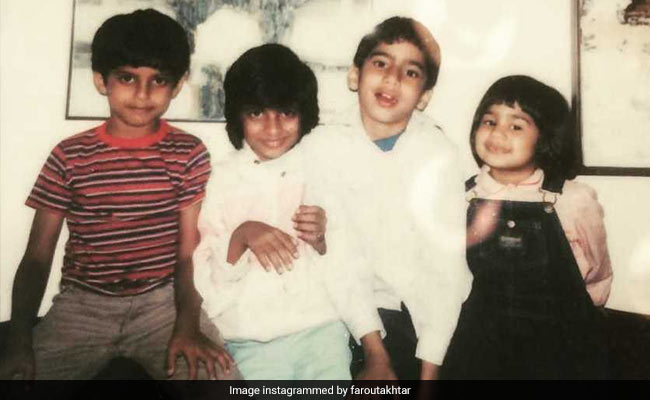 Farhan Akhtar took a trip down the memory lane and he ensured that his fans also get to be a part of it. On Sunday evening, the 45-year-old actor shared a throwback picture from his childhood days. BTW, did we tell you that the picture also features Farhan along with his filmmaker sister Zoya Akhtar and their cousins Kabir Akhtar and Nishat Akhtar. The quartet can be seen happily posing for the camera in the throwback picture. Besides the super cute picture, what caught our attention was Farhan's interesting caption on the picture. Farhan channeled his inner director and he captioned the post: "Seems this picture of us cousins was taken before wide angle lenses were invented."

As of now, Zoya has not reacted to Farhan's post but we are eagerly for her response. Without much ado, take a look at Farhan Akhtar's post here:

Seems this picture of us cousins was taken before wide angle lenses were invented. @zoieakhtar @kabirakhtar @nishat

Farhan, who was recently in London, was undergoing training under former kickboxing champion Drew Neal along with his rumoured girlfriend Shibani Dandekar. The actor actively posted updates on his Instagram profile. This is what we are referring to:

On the work front, Farhan Akhtar will next be seen in Shonali Bose's The Sky Is Pink, co-starring Priyanka Chopra and Zaira Wasim. The film is based on the life of late motivational speaker and author Aisha Choudhary.

In terms of work, Zoya Akhtar recently directed Gully Boy, starring Ranveer Singh and Alia Bhatt. She also directed a few episodes of the web-series Made In Heaven. The filmmaker has not announced her upcoming projects as of now.