"Who needs a toothpaste brand when we have each other," wrote Farhan Akhtar 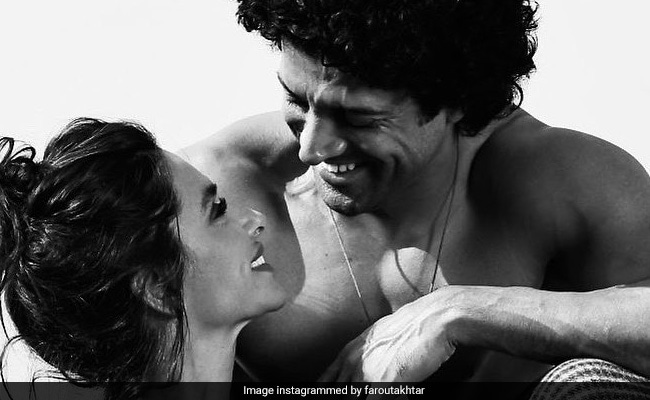 The reason behind Farhan Akhtar and Shibani Dandekar's ear-to-ear grins in their latest Instagram entries is not hard to guess. It's simple - they "make each other smile" (just the way, Farhan described in his Instagram post). On Thursday, the couple shared identical pictures on their respective Instagram profiles and if we had to sum it up in a word, "dreamy" is what we could call it. Farhan accompanied the stunning greyscale picture with an equally interesting caption and he wrote: "Who needs a toothpaste brand when we have each other. Shibani Dandekar, you make me smile."

Who needs a toothpaste brand when we have each other..!! @shibanidandekar#youmakemesmile

Shibani Dandekar and Farhan Akhtar reportedly started dating last year. They made their relationship Instagram official of sort last year and are frequently seen making appearances on each other's Instagram profiles. Check out some of the posts here:

Shibani accompanied Farhan to the premiere of his film The Sky Is Pink at the Toronto International Film Festival (TIFF) earlier this year.

#SKYISPINK - Was lucky enough to witness the magic of this film as it premiered at Toronto Film Festival and was blown away by how beautifully powerful it is in so many ways! @shonalibose_ you are a star .. she has managed to weave humour and heartbreak through the story with perfection! I was oscillating from laughter to tears with such speed and intensity that I felt pretty exhausted yet so fulfilled!! haha! I couldn't be prouder of @faroutakhtar and @priyankachopra for their incredible portrayal of Niren and Aditi! Their chemistry on screen is just magical! They hit all the right notes in every single frame! both just so DAMN good!! @zairawasim_ and @rohitsaraf10 were beyond brilliant as Aisha and Ishaan and just easy to watch and love - this entire family took you on a journey and just made your heart melt! Killer writing by Nilesh Maniyar!! Please don't miss out on watching this lovely film on October 11th! It is perfection! Congratulations to the entire team @roykapurfilms #ronniescrewvala @purplepebblepictures ps don't miss the insane track by Ishaan Chaudhary @memba.music PS DO NOT MISS me photo bombing the cast and crew picture dress by @rasario styled by @shivsawhney @khyatibusa Shonali's earrings by @hanut101

The couple walked the ramp together at the Lakme Fashion Week, earlier this year. Farhan shared video of Shibani on Instagram and he wrote: "You're the one that I want."

Farhan Akhtar was earlier married to celebrity hairstylist Adhuna Bhabani, with whom he has two daughters - Shakya and Akira. On the work front, Farhan was last seen in Shonali Bose's The Sky Is Pink, co-starring Priyanka Chopra and Zaira Wasim. He will next be seen in Rakeysh Omprakash Mehra 's sports drama Toofan.