The film stars Farhan Akhtar and Mrunal Thakur as leads 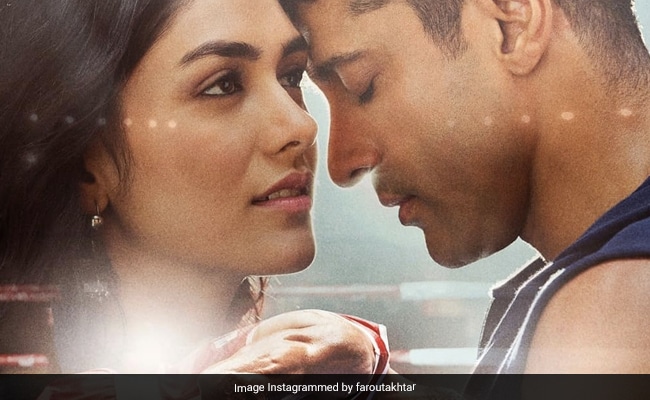 Farhan Akhtar, who was last seen in Shonali Bose's The Sky Is Pink (2019), has been gearing up for his much-awaited film Toofaan. The movie was scheduled to be premiered on Amazon Prime Video on May 21 this year. However, the makers of Toofaan have now postponed its release as Covid-19 cases continue to rise amid the coronavirus pandemic. On Monday, Farhan, who will play the lead role of a boxer in Rakeysh Omprakash Mehra's directorial venture, shared the news on Instagram and wrote, "In solidarity" in his caption. The actor posted a statement on the platform which read, "...We have taken the decision to postpone the release of our film 'Toofaan' until the situation improves..."

"The situation in India is truly heart-breaking and we, at Excel Entertainment and ROMP Pictures send our thoughts and prayers to everyone affected by the pandemic. In light of the severity of the situation, our focus is completely on the pandemic and on supporting our employees, their families and in helping the wider community..." an excerpt from the statement read.

The makers of Toofaan informed everyone that the team will announce the new release date later. The team also requested people to get vaccinated "when it's your turn". The statement added, "We will issue an update regarding the new release date in due course of time. Please continue to observe Covid Appropriate Behaviour. Also, please register and get vaccinated when it's your turn. On behalf of the entire team of Toofaan, we urge you to Stay Home, Stay Safe And Stay United. Jai Hind.

Farhan Akhtar's Toofaan co-star Mrunal Thakur also posted the same statement on her Instagram handle. In her caption, Mrunal wrote, "Let's join hands and stand in solidarity. Taking a step back as an artist but we promise we'll be back to entertain you in good time. Stay home, stay safe."

On March 10 this year, Farhan Akhtar had announced on Instagram that Toofaan will be released on Amazon Prime Video on May 21. In his post, the actor also informed that the teaser of the film will be out on March 12. Sharing a brand new poster of the movie, he wrote, "Toofaan Uthega! Catch the teaser on 12th March at Amazon Prime Video...World premiere - May 21

Farhan also shared two other new posters of Toofaan on the platform back then. See them here:

On March 12, Farhan shared the teaser of Toofaan on his Instagram handle and wrote a note along with it. The actor wrote, "Toofaan Teaser...It fills me with immense joy to give you the first glimpse of a film into which we poured all our love, passion, exuberance and madness. It truly is a labour of love and today I am so excited to share it with you. Here's presenting the #ToofaanTeaser... big big hug #ToofaanOnPrime premieres May 21, on Amazon Prime Video.

Toofaan was initially scheduled to be released on October 2 last year, however, it was delayed due to the coronavirus pandemic. In September 2019, Farhan had shared a poster of the film and wrote, "Toofan Uthega!! FIRST LOOK! #TOOFAN releasing 2nd October 2020!

Toofaan is co-produced by Ritesh Sidhwani and Rakeysh Omprakash Mehra under the banners of Excel Entertainment and ROMP Pictures respectively. In Toofaan, Farhan Akhtar will play the role of a national-level boxer Aziz Ali and Mrunal Thakur is cast as his love interest Pooja Shah. Paresh Rawal will play the role of Farhan's coach in the movie. The film also features Vijay Raaz and Darshan Kumar in key roles.

Toofaan marks the second collaboration of Farhan Akhtar and Rakeysh Omprakash Mehra after the gap of eight years. Farhan and Rakyesh earlier worked with each other in their 2013 film Bhaag Milkha Bhaag.

Meanwhile, according to a report, around 3.68 lakh new COVID-19 cases were recorded in India in the last 24 hours. Over 3,417 COVID-related deaths have been reported since yesterday.