Toofan: Duck, Farhan Akhtar as a boxer will spare no one 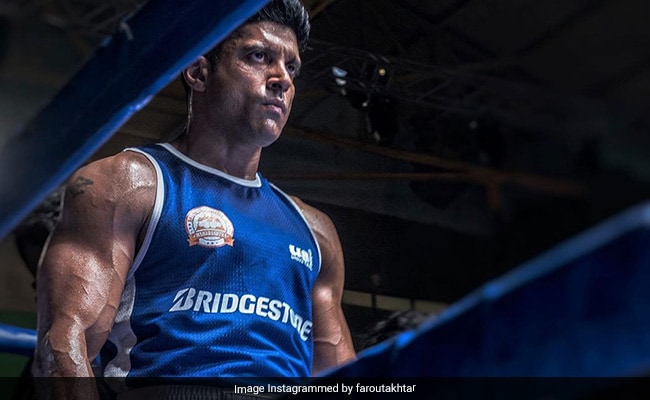 If Farhan Akhtar's latest Instagram entry doesn't make you speechless, we don't know what will. The 45-year-old actor shared a picture of the first look from the sports drama Toofan and intense can't even begin to describe it. In the picture, Farhan can be seen dressed in a boxing jersey and he can be seen wearing a pair of gloves as he stands in a boxing ring. The expression on Farhan's face is intense and the actor underwent massive training for his role as a boxer in the film. In his post, the Rock On!! actor also stated that the film is slated to release on October 2, this year. The actor wrote: "When life gets harder, you just get stronger. Iss saal Toofan uthega. Releasing on October 2, 2020. Happy to share this exclusive image with you as we dive into the new year. Hope you like it."

Last year, Farhan shared the first look from the film on social media. He wrote: "Toofan uthega. First look is here. Toofan releasing on October 2, 2020." ICYMI, this is the post we are talking about:

Toofan has been directed by Rakeysh Omprakash Mehra. The sports drama will be Farhan and Rakeysh's second project together. The duo have previously worked together in the 2013 film Bhaag Milkha Bhaag, which was based on the life of legendary field sprinter Milkha Singh. The film will be co-produced by Ritesh Sidhwani, Farhan Akhtar and Rakeysh Omprakash Mehra and it also features Paresh Rawal in a pivotal role.

Farhan Akhtar was last seen in Shonali Bose's The Sky Is Pink, which also stars Priyanka Chopra, Zaira Wasim and Rohit Saraf. The film released on October 11 last year and it was also screened at the Toronto International Film Festival.