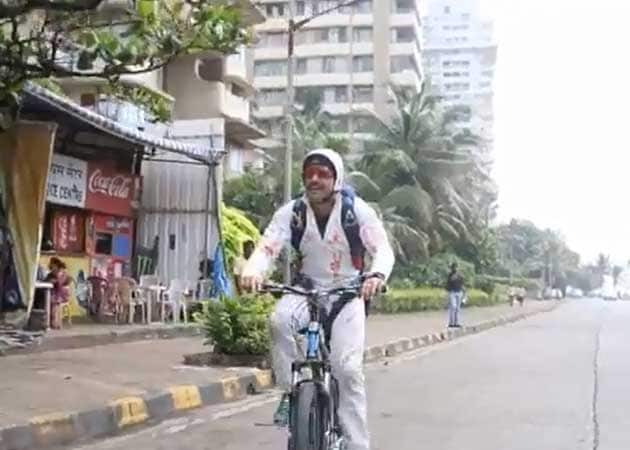 Farhan in a still from the video he posted on YouTube

It is the season for being daring in Bollywood and after Ranveer Singh and Shah Rukh Khan, it was the turn of Bollywood actor Farhan Akhtar to respond to Hrithik Roshan's Bang Bang challenge. Hrithik had challenged Farhan on Twitter:

Farhan sportingly took up the challenge and posted his video:

@iHrithik hahahahahahaha.. Couldn't resist.. when else would one get a chance to be such an extreme sport... Shine On!!

In the video, Farhan says, "Hrithik, you mental boy, I humbly accept your dare. Bang Bang. The next few scenes show Farhan cycling down the streets of Mumbai in skdiving gear. He cheerfully waves at passersby and even asks them for directions. The video ends with Farhan blowing a flying kiss for Hrithik and saying, "Hrithik my mental boy. That's for you."

The song Dil Dhadakne Do from their film Zindagi Na Milegi Dobara hums in the background.