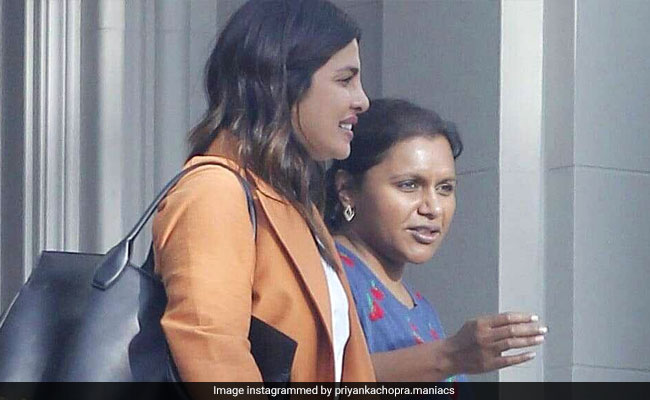 Pictures of Priyanka Chopra exchanging pleasantries with Mindy Kaling outside the latter's home in New York propelled reports of their possible collaboration. Mindy Kaling, best-known for The Office and The Mindy Project, stepped out of her apartment to see-off Priyanka, who was dressed in denims and a tee with an orange blazer. Picture of Priyanka and Mindy's last minute good-byes are all over the Internet and fans are guessing that they'll soon work together. "Mandy Kaling and Priyanka are really working on a project together and this is not a dream!! I'm crying... this is the content I signed up for. Hope they announce it sooooon. OMG, I can't wait," wrote a convinced fan on Instagram. Several others we equally (if not more) excited: "Do you hear that screaming... yes that's me."

@mindykaling & Priyanka are really working on a project together and this is not a dream!! Im crying this is the content i signed up for hope they announce it sooooon omg i can't wait

Priyanka spotted with @mindykaling in LA today. Reports say they're working on a project together

Priyanka Chopra, last seen in Isn't It Romantic? is currently making Bollywood film The sky Is Pink with director Shonali Bose. Priyanka is co-producing the film with siddharth Roy Kapur and it also stars Farhan Akhtar and Zaira Wasim.

Priyanka Chopra also recently announced her YouTube original showIf I Could Tell You Just One Thing, in which she chats with inspiration people. You never know Mindy Kaling may be on the roster of guests for the show.

Mindy Kaling is an actor, producer and director and she has also featured in films like No Strings Attached, Inside Out and Ocean's 8.