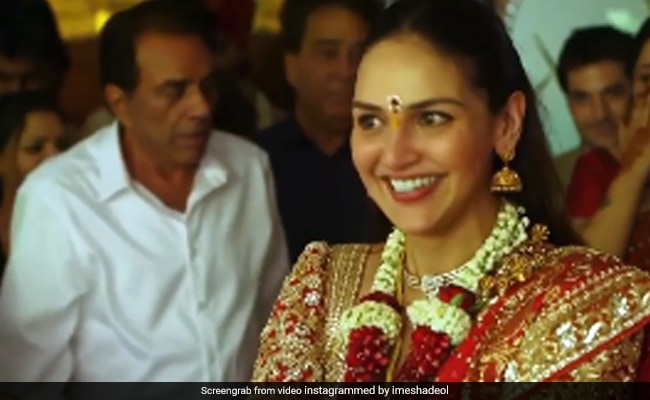 Esha Deol made a trip down memory lane on Tuesday and shared a lovely video from her wedding album on her Instagram profile. The actress posted a video from her vidaai ceremony and it features her husband Bharat Takhtani, father Dharmendra, mother Hema Malini - both actors - and sister Ahana. Esha looks gorgeous in a red embroidered saree, which she paired with gold jewelry. The clip comprises several emotional moments, in one of which Esha can be seen crying while hugging her father, who also gets teary-eyed. Sharing the video, Esha called it "memories for life" and thanked the production company for capturing the precious moments of her life."

In the clip, Esha can be heard saying in the background: "I am someone who doesn't cry easily, I don't remember the last time I probably cried. When I see that vidaai video, I cry. Even today I cry."

#memoriesforlife Thanks & best wishes to u my dear @badalrajacompany ! U are fantastic at his job

Esha Deol is Dharmendra and Hema Malini's elder daughter. Esha's sister Ahana Deol is a trained Odissi dancer, just like her and her mother. Hema Malini, Esha Deol and Ahana Deol have performed several times together on stage. Before Hema Malini, Dharmendra married Parkash Kaur. They are parents to sons Sunny and Bobby Deol - both actors - and daughters Vijeeta and Ajeeta.

On the work front, Esha Deol has featured in a number of films. She made her debut in the film industry in 2003 with Koi Mere Dil Se Poochhe and went on to feature in movies like Na Tum Jaano Na Hum, Dhoom, LOC Kargil, No Entry, Kaal, Just Married and Tell Me O Kkhuda to name a few. After her wedding, Esha took a break of sorts from acting and made a comeback with short film Cakewalk in 2018.