Emraan Hashmi, Who Had To Call Shah Rukh Khan 'Dhakkan', Is 'Embarrassed'

"I felt bad because in that video, I used some bad words for him (Shah Rukh Khan)," said Emraan Hashmi 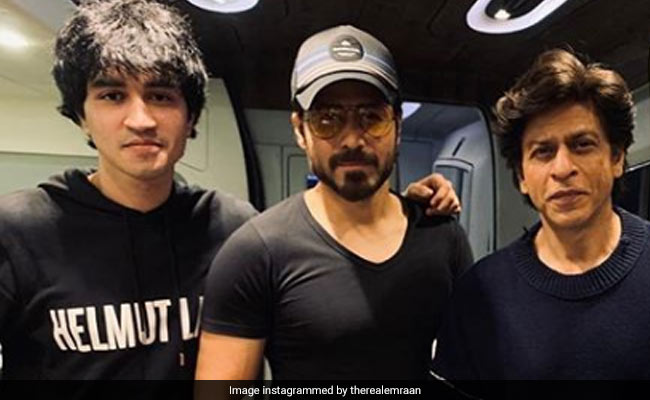 Bard Of Blood promotions called for an "embarrassing" moment for Emraan Hashmi, he revealed in an interview to news agency IANS. Remember that interrogating pre-trailer video featuring Emraan and Shah Rukh Khan? Emraan, who featured in his Bard Of Blood character of a spy in the video, referred to Shah Rukh as "dhakkan" and "dabba" while explaining that he is of no use to the intelligence authorities. "I felt bad because in that video, I used some bad words for him (Shah Rukh Khan)," Emraan told IANS. The 40-year-old actor, who is a huge fan of Shah Rukh, added his immense respect for the actor made it all the more difficult for him to act tuff in front of the superstar.

"He has a very profound impact on me as an artist and as a person, because I have grown up watching his films. But in that video, I referred to him as 'dhakkan' and 'dabba' (idiot) and then I put a cloth bag on his head so, I felt bit embarrassing doing that but we had to shoot it for professional reasons," IANS quoted Emraan as saying.

Bard Of Blood is Shah Rukh Khan's production house Red Chillies Entertainment's first collaboration with Netflix. The promotional video prepped the ground for the trailer of Bard Of Blood and Emraan reveals it was SRK's genius idea: "It was really a nice concept and I feel we should praise him (Shah Rukh) for that, because I don't think any other actor at his level would have that kind of self-deprecating humour in a video. Therefore, I feel that he is fantastic in whatever he does."

Based on Bilal Siddiqi's book of the same name, Bard Of Blood features Emraan Hashmi as excommunicated RAW agent Kabir Anand, who is called back to service after four intelligence officers are held captive in Pakistan. Bard Of Blood cast also includes names like Sobhita Dhulipala, Kirti Kulhari, Vineet Kumar, Jaideep Ahlawat, Danish Husain and others.