Netflix's Bard Of Blood Not-A-Trailer: Shah Rukh Khan Vs Emraan Hashmi. And The Winner Is...

For the uninitiated, Netflix's Bard Of Blood is produced by Shah Rukh's Red Chillies Entertainment. 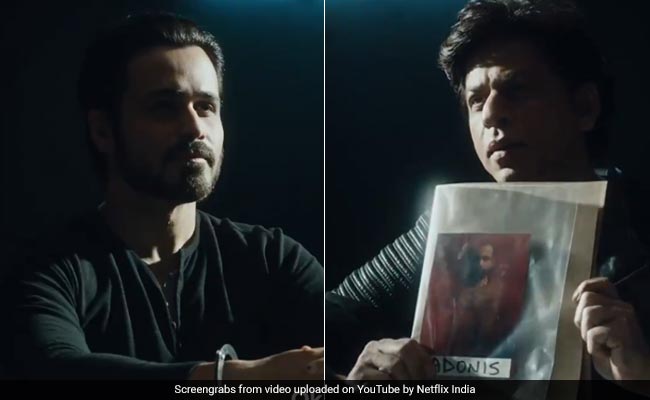 After sending himself up in a series of teasers yesterday, Shah Rukh Khan dropped the trailer of his Netflix production Bard Of Blood today. Except it wasn't the trailer - the actual trailer released a few hours later (more below). Featuring series star Emraan Hashmi, the not-a-trailer continues the narrative of SRK roped in by agencies unknown to interrogate a mystery man. SRK, providing some obvious comic relief, refers to himself as 'Don, Badshah, Baazigar' but these celluloid epithets quickly prove to be of little help. Out of his depth seconds into the interrogation, SRK eventually finds himself at the receiving end of tables turned. Emraan Hashmi's taciturn character is revealed to be a super spy codenamed Adonis; this desi James Bond has little trouble leaving his bumbling adversary handcuffed and shrouded as he himself was in the opening of the not-a-trailer. For the uninitiated, Netflix's Bard Of Blood is produced by Shah Rukh's Red Chillies Entertainment.

Emraan Hashmi's summary of Shah Rukh Khan as the end is a hilariously insulting "dummy" - that might be a bit harsh but he's plainly used to more challenging assignments than matching wits with a screen hero.

The actual trailer of Bard Of Blood is a lot grittier than the spoof precursor. Watch here:

Sharing his experience of making Bard Of Blood, director Ribhu Dasgupta said in a statement: "This journey on Bard Of Blood has been one which I will cherish all my life. It has changed me as a person and as a filmmaker for the best. Directing the series for Netflix, in association with Red Chillies Entertainment and Mr Khan has been an extremely fulfilling experience. I am so glad I could be part of it and very excited about the trailer launch."