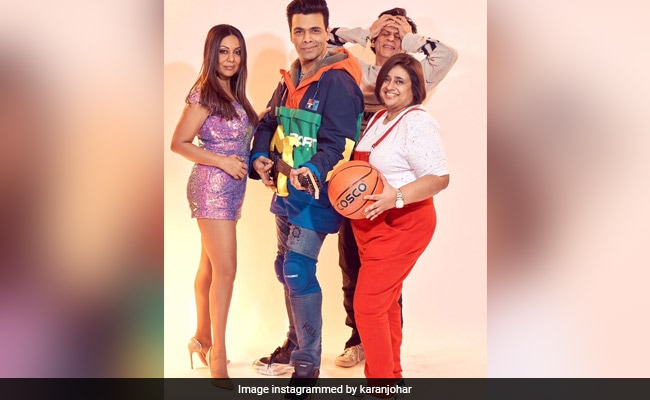 It's hard to imagine the iconic film Kuch Kuch Hota Hai without Shah Rukh Khan, Kajol and Rani Mukerji, right? Well, you might have a different school of thought after checking out filmmaker Karan Johar's latest Instagram entry. Why, you ask? Well, Karan Johar tried recreating the poster of Kuch Kuch Hota along with Gauri Khan and Kajal Anand. Gauri Khan channelled her inner Tina (which was played by Rani in the film), Anjali's look was recreated by Kajal Anand and Karan Johar had to be Rahul, "of course" (his words). And Shah Rukh Khan? The actor was too busy photobombing. In his post, KJo revealed that the picture happens to be from a 90's Bollywood themed-party.

Sharing the post on his Instagram profile, Karan Johar wrote: "So, Breaking news! We attended our dear friends 90's Bollywood theme bash! So Kuch Kuch Hota Hai it was for us! Gauri Khan channelled her inner Tina. Kajal Anand channelled Anjali and me of course had to be Rahul. Don't miss the most embarrassed Shah Rukh Khan photobombing our poster recreation." We can't wait to see Kajol and Rani Mukerji's reaction to Karan Johar's post.

So BREAKING NEWS! We attended our dear friends @bindraamritpal's 90's BOLLYWOOD theme bash! So KKHH it was for us! @gaurikhan channelled her inner TINA @putlu channelled ANJALI and me ofcourse had to be RAHUL !!! Don't miss the most embarrassed @iamsrk photobombing our poster recreation! @kajol #rani

Kuch Kuch Hota Hai, made on a budget of Rs 10 crore, is said to be the highest-grossing Bollywood film of 1998, which reportedly collected over Rs 100 crore across the globe. The film also featured Sana Saeed, Farida Jalal, Anupam Kher, Reema Lagoo and Archana Puran Singh. The film also had a cameo appearance by Salman Khan. Kuch Kuch Hota Hai clocked 21 years in October, this year.