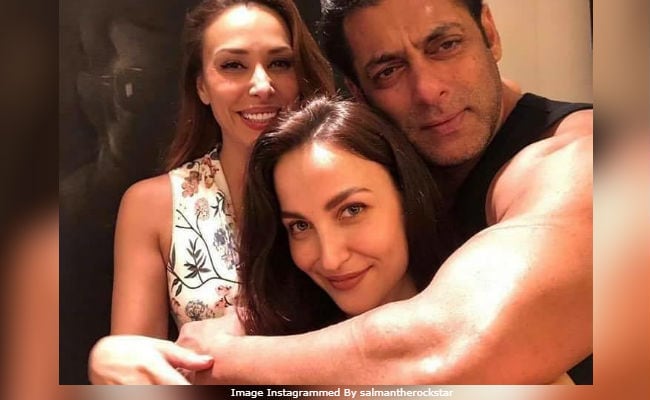 New Delhi: Actress Elli AvrRam, who debuted on television with Salman Khan's Bigg Boss 7, had apparently posted a picture with the superstar and his rumoured girlfriend Iulia Vantur but later deleted it. However, folks have chanced upon the picture and it has been widely shared on social media by Salman's fan clubs. It appears that Elli did visit Salman and Iulia in Mumbai as her Instagram account has picture of her with both of them (individually) and renowned singer Akon. Salman Khan, 52, and Iulia Vantur, 37, have reportedly been dating for some time now but have never acknowledged a romance.

Here's the viral picture of Elli with Salman and Iulia.

Take a look at the pictures which Elli shared separately with Salman and Iulia.

And, this with Akon.

When you hear them calling out AKON let them keep on calling....If I only knew back then when I used to sing this song with my friend that one day I'll meet @akon #keeponcalling #akon #lifeisfullofsurprises

Salman Khan was recently given bail in the 1998 blackbuck case. He was sentenced to five years in jail, after which he spent two days in a Jodhpur jail.

Promoted
Listen to the latest songs, only on JioSaavn.com
Salman is currently finishing filming Race 3 and his other film Bharat also went on floors last week. Mumbai Mirror earlier reported that Salman has roped in Iulia to sing a romantic song in Race 3. "It was on Salman's suggestion that she was brought on board. The team was looking for a female voice who fit the bill and he thought Iulia was perfect for the vocals," a source told Mumbai Mirror. She is a Romanian TV presenter and debuted in Bollywood as a singer. Her first song Every Night And Day released a while ago.

Elli AvrRam is a Swedish actress. After Bigg Boss 7, she made her Bollywood debut opposite Maniesh Paul in 2013's Mickey Virus. Kis Kisko Pyaar Karoon and Naam Shabana are her other films. Elli's upcoming projects are the Telugu and Tamil remakes of Kangana Ranaut's Queen. She is reportedly dating cricketer Hardik Pandya.