Nominated by Smriti Irani, Ekta Kapoor took the Safe Hands Challenge and posted it with a disclaimer 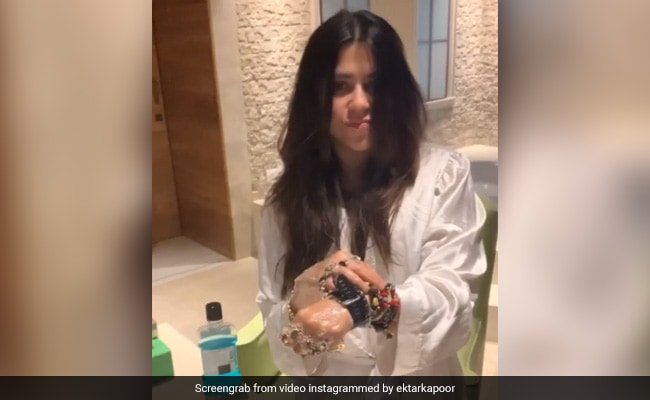 Ekta Kapoor in a still from her video (courtesy ektarkapoor)

TV czarina Ekta Kapoor was recently nominated for the Safe Hands Challenge amid the coronavirus outbreak by Smriti Irani. Ekta gladly accepted the challenge and posted a video of her washing hands. Ekta Kapoor, who wears a bunch of bracelets on both her hands, accompanied her Safe Hands Challenge with a disclaimer while posting it on Instagram but that didn't seem enough for a section of her Instafam, who trolled her anyway. "Due to my ring and bracelet filled hands, it takes me a whole minute plus an additional layer of sanitiser! And don't mind the hair, it's my quarantine look," Ekta captioned her video, in which she can be seen cleaning her bracelets and rings with soap for a considerable amount of time along with her hands.

I accept ur #safehandschallenge I nominate @anitahassanandani @rheakapoor @imouniroy @divyankatripathidahiya !p.s due my ring bracelet filled hands it takes me a whole minute plus an additional layer of sanitizer!n don't mind d hair it's my quarantine look

But comments such as: "Your jewellery will still carry a lot of micro infecting agents," and "Challenge failed itself... try again with empty wrist," flooded her feed. "May be you should take off some rings, bracelets. They won't run away. Saves time, sanitiser, water and money... even if you have enough to throw away," read another comment while another user added: "It's a fail! You are supposed to take off your rings and those dangling bracelets."

Meanwhile, Ekta interrupted the barrage of comments trolling her with an explanation: "Checked with doctor. Sanitised as per instructions. Also, I wear gloves outside (If I step out). I have a 13-month-old son. So, I have done the drill as per protocol. Thanks for your concern." Ekta Kapoor became a single parent via surrogacy when she welcomed son Ravie last year. 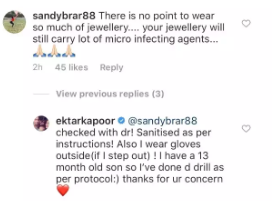 The Safe Hands Challenge has also been taken up by Anushka Sharma and Deepika Padukone.