Ekta Kapoor Thinks She Is 'Ageing Backwards'. Here's Why 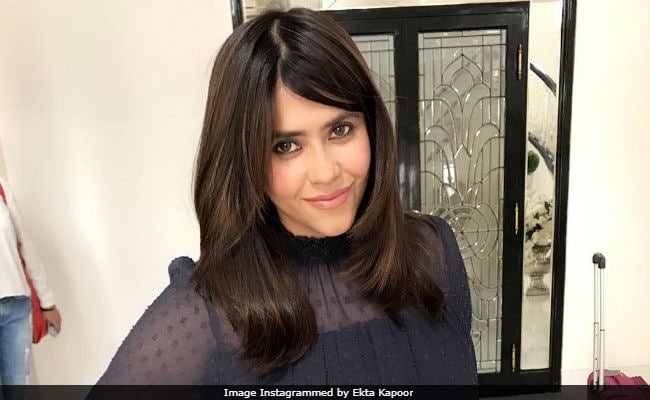 New Delhi: Television mogul Ekta Kapoor, who turned 43 on Thursday said that she is "ageing backwards". Why? Because in her Twenties when she started off her career, she was into producing saas-bahu sagas. But almost twenty years past, she has forayed into the "digital platform" and is making more youth oriented shows, IANS reported. "I am ageing backwards I am telling you... in my early 20s, I used to make TV series on saans-bahu sagas, and now making so many youth shows on the digital platform," IANS quoted Ekta Kapoor saying. The "entertainment industry" has gone through a major change and this, Ekta Kapoor thinks, has made way for a new wave (the digital platform). "I think this happens because of the way the whole entertainment industry has changed, with new platforms, a mature audience and the demand for customized content."

Ekta Kapoor, who is the founder of Alt Balaji said that the things she can't do on TV, she saves it up for the digital platform since she thinks the youth is more "receptive" there. "Whatever I do not get to do on TV, I do on the digital platform because the audience is different, young and more receptive towards experimental content. So, I have got the opportunity to create content like Haq Se and The Test Case," she said. "Digital is the medium that serves content for every age group of people with a different taste. That is how entertainment should be," added Ekta. Ekta Kapoor who had started off her career at the mere age of 17 has come a long through and has forayed into film production as well. Some of the films produced under Balaji Motion Pictures are Love Sex Aur Dhoka, Lipstick Under Mu Burkha, Shor In The City, The Dirty Picture and the list goes on. Ekta is also producing Naagin 3, which also stars Rajat Tokas, Rakshanda Khan, Chetan Hansraj and Pearl V Puri.

Ekta Kapoor recently co-produced Veere Di Wedding, which is doing a remarkable business at the box office. Ekta Kapoor elated with the box office trends of the film had earlier tweeted: "We were gonna break even at 23 crore and we did 36 in the weekend! Veere Di Wedding weekday trends are shocking too since it's an A film! It's radical and has had its share of brickbats! But the love is far outnumbered! Next time, I hope when a project with an all-women cast is made we are used as an example to get it greenlit! And the disparity in pay is always justified with 'women can't open a film', this (Veere Di Wedding) with Raazi should shut that myth forever AMEN."

Family and fans poured in their wishes on Ekta Kapoor's 43rd birthday. Here are the birthday wishes for Ekta Kapoor:

A very happy birthday to my dearest @ektaravikapoor. Thank you for being in my life and for all the love and support. You're one of the nicest souls I know.

wishing our beloved fav,
the one and only undisputed Television Queen #EktaKapoor a very happy birthday...
have a great year ahead @ektaravikapoor ji#HappyBirthdayEktaKapoor

Thank you @ektaravikapoor for making us fall in love with cinema and soap operas all over again. #HappyBirthdayEktaKapoor#HappyBirthdayEntertainmentpic.twitter.com/g0e7h7JcZz