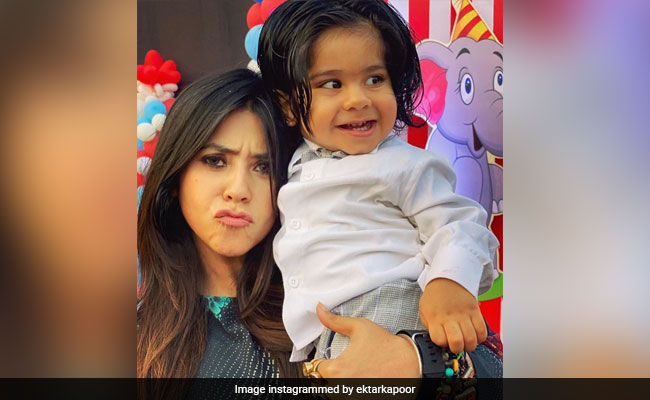 A few days after her son Ravie's first birthday, TV producer Ekta Kapoor posted an adorable picture of herself along with her little munchkin. In the picture, the mother-son duo can be seen happily posing for the camera. The 44-year-old film producer accompanied her post with a hilarious caption. She compared her son's hairdo to that of Salman Khan's in the 2003 film Tere Naam. She wrote in her post: "Me with Ravioli (Ravie's nickname) who is looking like Radhe from Tere Naaam." The comments section was flooded with heart emojis and compliments from Karisma Kapoor, Tahira Kashyap, Divya Khosla Kumar, Karanvir Bohra and many other celebrities.

On Ravie's first birthday, Ekta Kapoor and Tusshar posted the first picture of Ravie. Tusshar Kapoor had earlier promised that they would be sharing Ravie's pictures on his first birthday and that it was a conscious decision to keep baby Ravie's picture under wraps. "Exactly a year ago on this day, a new journey began... Writing Mentalhood had made me paranoid. Being a mother was not easy. A lifelong commitment. You came, smiled and I knew that I finally belonged," read an excerpt from Ekta's birthday wish for Ravie.

Exactly a year ago on this day a new journey began... writing' mentalhood' had made me paranoid ...being a mother was not easy .. a life long commitment....u came smiled n I knew ...I finally belonged !!!! Thanku alt digital for making this video n gifting it to me ...n sorry maasi @smritiiraniofficial ur stressed I know ...happpie bday ravioli

Filmmaker Ekta Kapoor, who has been awarded the Padma Shri this year, welcomed son Ravie via surrogacy in 2019. She did not share his pictures on social media for a year.