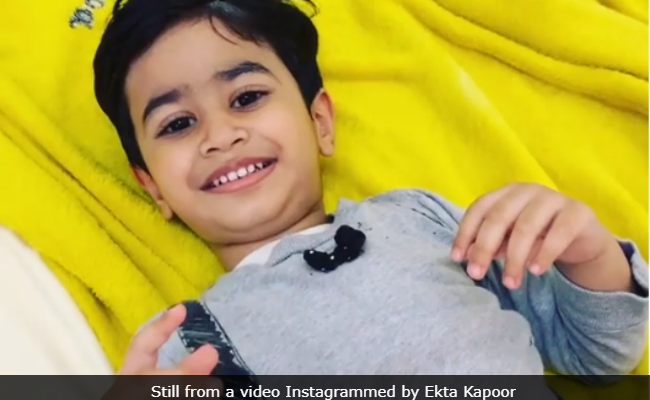 Laksshya Kapoor in a still from the video. (Image courtesy: ektaravikapoor

Ekta Kapoor's latest Instagram post had us hooked immediately. Why, you ask? Well, let's just say that the producer treated her Instafam to the cutest jam session ever. In case you still haven't figured out what we are talking about, we would suggest you to go and check out the video shared by Ekta Kapoor on her Instagram profile, in which she and her nephew Laksshya Kapoor can be seen singing Lata Mangeshkar and Kishore Kumar's iconic song Phoolon Ka Taron Ka from the 1971 film Hare Rama Hare Krishna and we must tell you that we simply loved the duo's rendition of the song. "When your bua croaks but you love the song and finish it for her," Ekta captioned the video. The Internet too can't seem to get enough of the video and the comments on Ekta Kapoor's post prove that. "I can watch this again and again," read a comment. Remarks like "how sweet" and "adorable" were also seen on the comments section.

Without much ado, check out the video here:

We simply love it when Laksshya makes appearances on her bua's Instagram profile. Ekta's New Year greeting also featured Laksshya. In the picture, Laksshya could be seen posing in front of a Christmas tree. She captioned the post: "Happy new year! May health and happiness never leave your side! The rest is transitory."

How can we forget the oh-so-adorable picture shared by her, in which Laksshya could be seen curled up in his grandfather Jeetendra's arm? Here are some more pictures of Laksshya and Ekta Kapoor.

Laksshya Kapoor was born to Tusshar Kapoor via IVF on June 1, 2016. Laksshya is often spotted accompanying his father and aunt on outdoor shoots. He goes to play school and is frequently spotted with plays dates with Kareena Kapoor and Saif Sli Khan's son Taimur and Karan Johar's children- Roohi and Yash.