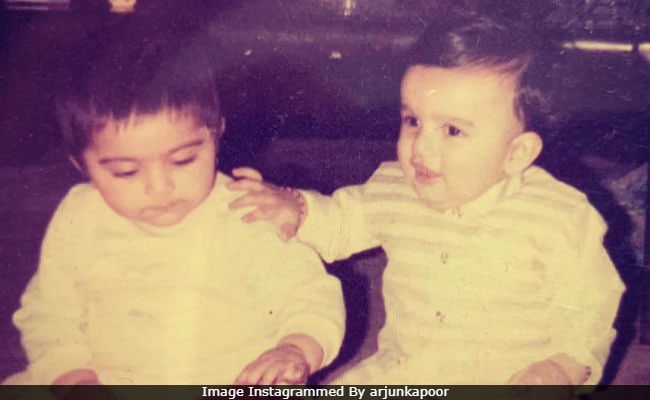 Sonam Kapoor's actor cousin Arjun Kapoor added a wonderful post as part of the Ek Ladki Ko Dekha Toh Aisa Laga challenge, in which celebs are sharing photos featuring their special ones. The challenge was started by Anil Kapoor over the weekend. For Sonam Kapoor, Arjun shared their childhood picture and wrote, "From the time I remember, you will always be the first ladki in my life that I loved hanging out with. So proud of you. You're courageous and beautiful. Proud to have a sister like you. Stay the child at heart that you are and most importantly all the best for February 1." Ek Ladki Ko Dekha Toh Aisa Laga is Sonam's first film with dad Anil Kapoor. It releases this Friday. Arjun also applauded Sonam and Anil Kapoor for "choosing" this script. Apart from Sonam, Arjun's post has been liked by several members of the Kapoor family including Sunita Kapoor, Rhea, Sanjay Kapoor, Maheep and others. "Love you," wrote Sonam.

Me trying to get this Ladki's attention since childhood & (swipe right) her finally noticing then looking straight at the camera & not me !!! @sonamkapoor from the time I remember u will always be the first ladki in my life that I loved hanging out with... so proud of u & @anilskapoor for going out on a limb & choosing a script u believed in beyond the perceptions of the so called world. Ur courageous ur beautiful. Proud to have a sister like you. Stay the child at heart that you are & most importantly all the best for 1st feb #ekladkikodekhatohaisalaga

Anil Kapoor's Ek Ladki Ko Dekha Toh Aisa Laga post featured him with wife Sunita Kapoor. With the photo, he posted an adorable note for her.

Share your stories of the special women in your life... Ek Ladki Ko Dekha toh kaisa laga...Looking forward to your stories @RajkummarRao@arjunk26@Varun_dvn@Riteishdpic.twitter.com/iwO0C7PqZR

Sonam Kapoor shared a picture with sister Rhea and wrote, "My sister is the smartest, wisest person I know." She tagged Arjun and Harshvardhan and other friends like Karan Johar, Swara Bhasker, Jacqueline Fernandez, Masaba Gupta and Varun Dhawan.

Thank u @AnilKapoor sir for tagging me. Share ur stories of the special woman in your life..#LetLoveBe..
Looking forward to your stories @RanveerOfficial@juniorbachchan@ayushmannkpic.twitter.com/glj59PEbnY

Ayushmann Khurrana and Riteish Deshmukh have also added their posts to the album.

#EkLadkiKoDekhaTohAisaLaga
For me @tahira_k is the biggest inspiration. She's smart, selfless and sexy. Thanks @RajkummarRao for the tag. I would like to know the stories of @Aparshakti@RochakTweets and @niteshtiwari22#LetLoveBepic.twitter.com/bPaih1eRfG

#EkLadkiKoDekhaTohAisaLaga Jaise best friends, made for each other, dil dhak dhak forever. This has been my story for the last 17 years & counting @geneliad - pic.twitter.com/BwjTQwk5FH