Ed Sheeran Concert Mumbai: When in Mumbai do as the Bollywoodwallahs do - forget Shape Of You, we spotted Ed Sheeran dancing to Badri Ki Dulhania 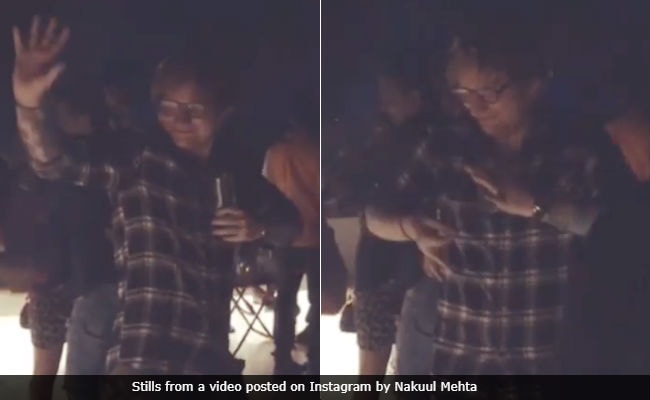 New Delhi: Ed Sheeran, the guest of honor at Farah Khan's party on Saturday night, rocked the do with some Bollywood moves, taught to him impromptu by the host and Maniesh Paul. Chucking Ed Sheeran's chartbusters aside the Bollywoodwallahs danced to songs like Badri Ki Dulhania and the Eraser hitmaker danced like no one's watching with them. Television actor Nakuul Mehta shared a snippet from last night's party, which shows Ed Sheeran matching steps with Maniesh Paul and others like a boss. Nakuul, best known for his show Ishqbaaaz , also said that Ed Sheeran also sang a bit of the song. Take a look.

And the party begins!! He loves the shape of me!! @edsheeran

The highlight of the party @iamsrk n me taking any chance to kiss him! Lov u my handsome friend

Sweetest couple @shahidkapoor n @mira.kapoor .. thank you for being such sports

Promoted
Listen to the latest songs, only on JioSaavn.com
Ed Sheeran will be performing tonight as part of his Divide Album Asia Tour. Ed Sheeran will perform at Jio Gardens in BKC, Mumbai. Popular songs from his Divide album - like Eraser, Perfect, Hearts Don't Break Around Here, New Man, Dive, Galway Girl and Shape of You - will be a part of his songset.