In the photos, Kajol looks radiant in a bright yellow saree while Rani Mukerji looks adorable in a red-and-white printed saree 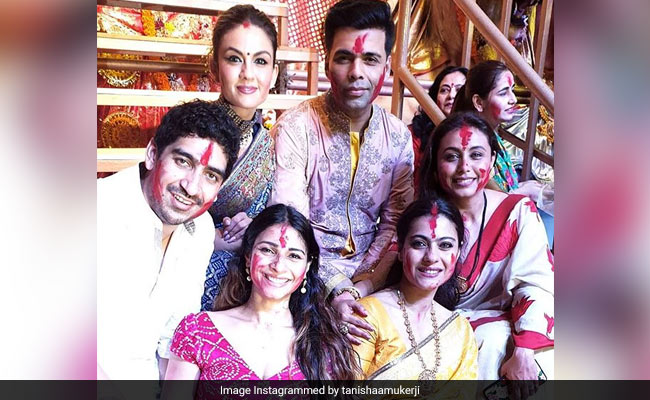 Kajol and Rani Mukerji are celebrating Durga Puja with zest and their latest sindoor khela pictures will totally give you festive vibes. The actresses are enjoying the festival with their family and friends from the industry including filmmaker Karan Johar. Giving glimpses of the sindoor khela, Kajol's sister Tanishaa Mukerji shared a group photo, which also features their cousins Rani and Ayan Mukerji as well as Karan Johar and Natasha Poonawalla. In the photo, Kajol looks radiant in a bright yellow saree while Rani Mukerji looks adorable in a red-and-white printed saree. Kajol also shared a couple of pictures on Instagram on Tuesday, which feature Tanishaa, Rani Mukerji and Karan Johar, and captioned them: "Started off all clean and bright... Swipe to see the madness."

Started off all clean and bright..... swipe to see the madness

In a separate post, Tanishaa Mukerji shared a selfie with Rani Mukerji and it wouldn't be wrong to say that the picture is stealing hearts on the Internet. Instagramming the photo, Tanishaa captioned it: "This is us."

With all the background noise the pujas are and always will be about family.... miracles do happen. #familyfirst #celebration #colourmehappy

Wishing every one a very happy ashtami..... Jai Mata Di.

First day of the pujas ... shoshti. Before we share it with everybody else ..

On the work front, Kajol was last seen in Helicopter Eela. She will next feature in Taanaji: The Unsung Warrior, a biopic on military leader Tanaji Malusare. Rani Mukerji, on the other hand, will next be seen in Mardaani 2.