Dulquer Salmaan's Sita Ramam Cast Shoots In Kashmir. "It's Like Stepping Into A Photograph," He Said

"It's hard to take in the depth and beauty of Kashmir with your eyes and believe you are witnessing it in person," said Dulquer Salmaan 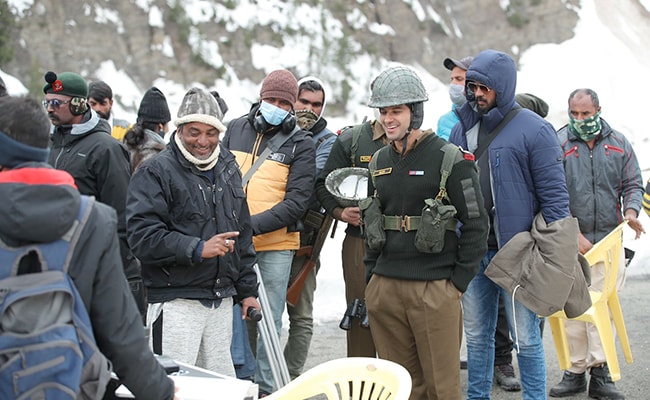 Dulquer Salmaan with the cast and crew of Sita Ramam

Director Hanu Raghavapudi's upcoming love saga Sita Ramam is being shot in the beautiful valleys of Kashmir. The cast and crew of the film recently flew off to the snowy mountains of the Valley for a one-of-a-kind experience and ended up shooting in places like Thajwass Glacier, Dal Lake, Jalali House, Rockstar house and other beautiful locales of Kashmir. After filming for almost a month, Dulquer Salmaan, who visited the place for the first time and couldn't seem to fathom the beauty of it, said, "It's like stepping into a photograph or a painting or a film. It's hard to take in the depth and beauty of Kashmir with your eyes and believe you are witnessing it in person. It's that awe-inspiring. In a heartbeat," adding that he would love to visit Gulmarg and Pahalgam.

Even Hanu Raghavapudi, who shot the film at a high-altitude place said in an official statement, "Kashmir is definitely the paradise on earth and has been the best host. The local people were friendly, gentle, helping and welcoming. We shot during the beginning of the 2nd phase lockdown with Covid restrictions, yet the police and government allowed us to complete the shoot as per the plan with Covid protocols in place. We finished our shoot schedule as per our exact plan. We even got the chance to indulge in some local food and experience a new culture." Of late, Kashmir is witnessing a substantial rise in film shoots, according to senior officials. Recently the officials have given 130 and more film shoot permissions to various producers and production banners to carry out their filmmaking.

A special officer approved the shooting for Sita Ramam as he believed that the film will showcase the beauty and grandeur of Kashmir to the audience.

Sita Ramam also stars Mrunal Thakur and Rashmika Mandanna. The teaser of the film was recently released and has received over 4.2 million views on YouTube. It is set in the war-torn Kashmir of 1965. Dulquer will play Lieutenant Ram, an orphan, serving the nation. Mrunal Thakur will be seen as Sita Mahalakshmi, Dulquer's love interest. It will release in three languages - Malayalam, Telugu and Tamil, on August 5, 2022.

Liger New Poster: Vijay Deverakonda Is Burning Up The Internet