"Give me one year l'll get to where you are," wrote Samantha Ruth Prabhu 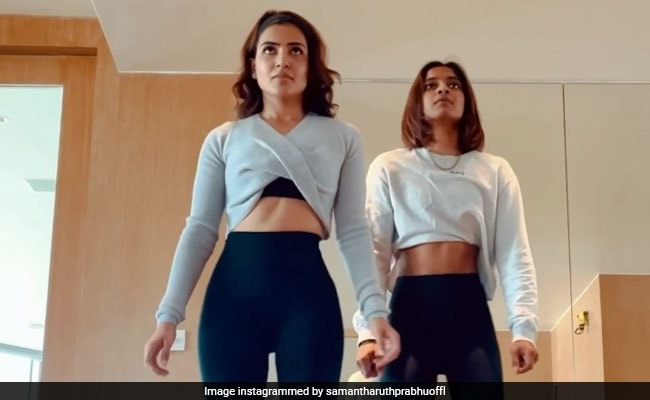 A still from the video Samantha posted. (courtesy samantharuthprabhuoffl)

Samantha Ruth Prabhu is giving us major fitness goals courtesy her new Instagram post, in which she can be seen acing the #DontRush Challenge. The actress can be seen nailing the routine along with her friend with utmost ease. Oh, BTW she took inspiration from Vicky Kaushal. Sharing the video, Samantha wrote in her post: "Vicky Kaushal made us do it! A huge shout out to this incredible woman Anusha Swamy... Give me one year l'll get to where you are. Show her some love." In the comments section, Samantha's friend Upasana Kamineni wrote: "Sam this is fab. I've watched it on repeat." Rakul Preet Singh added a fire emoji.

Vicky Kaushal, who took the challenge last month, shared his video on Instagram and he wrote: "Bitten by the #dontrushchallenge bug. Wasted much time watching videos of it, thought of wasting a little more by making one. Don't Rush. First reel BTW."

Samantha Ruth Prabhu has starred in films such as Ye Maaya Chesave, Rangasthalam, Neethaane En Ponvasantham, Yeto Vellipoyindhi Manasu, Seethamma Vakitlo Sirimalle Chettu, Majili (in which she co-starred with her husband Naga Chaitanya), Jaanu and Oh! Baby. She will next be seen in Kaathuvaakula Rendu Kaadhal and The Family Man Season 2.

In London, Sonam Kapoor Woke Up To This Pleasant Surprise From Mother-In-Law