Vicky Kaushal Aces The Box Jump. It Has A Manisha Koirala Connection

Vicky Kaushal shared a video of his workout session on Instagram. The actor captioned his post as, "Today's vibe!" 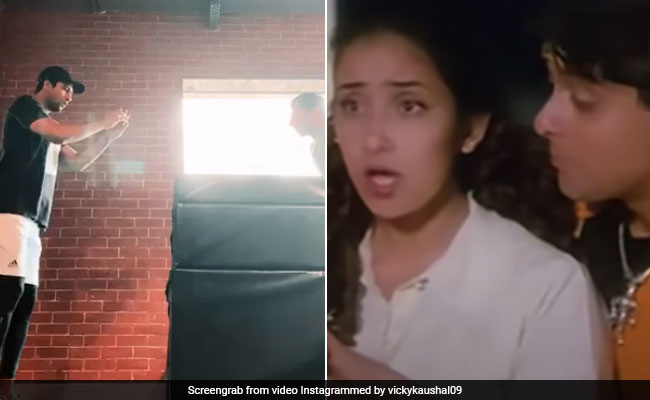 Need workout inspiration? Actor Vicky Kaushal might be able to help you enjoy your sessions. No, we aren't kidding! Vicky's latest Instagram post is giving us major fitness inspiration. The actor recently posted a short video on Instagram in which he can be seen performing a box jump routine. As can be seen in the clip, he opted for a black T-shirt and paired it with white shorts along with a black cap for his exercise. "Today's vibe! #reels #boxjumps..." Vicky wrote in his caption. Needless to say, he aced the jump. But before you watch it, we must tell you that the video has a Manisha Koirala connection.

The video features the song Aaj Main Upar Aasmaan Niche from the 1996 film Khamoshi: The Musical, which was picturised on Manisha Koirala along with Salman Khan. The song was sung by Kavitha Krishnamurthy and Kumar Sanu.

Vicky Kaushal was last seen in Bhoot Part One: The Haunted Ship, a film which released in 2020. Vicky was cast opposite Bhumi Pednekar in the movie. Now, the actor is gearing up for the release of Shoojit Sircar's upcoming directorial venture Sardar Udham Singh, a biopic on freedom fighter Udham Singh. The film will release this year.

Coming back to Vicky's latest video, tell us if you liked his workout. We surely did.