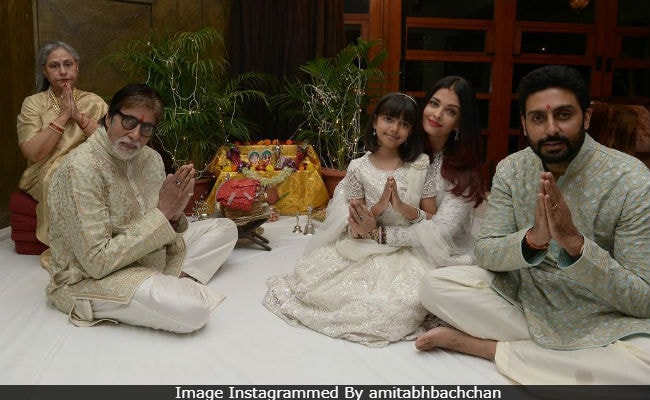 The Bachchans kept their Diwali celebrations strictly a family-only affair and spent the evening together. Highlights from the puja have been shared by Amitabh Bachchan and daughter-in-law Aishwarya Rai on their respective Instagram accounts and the pictures look fabulous. Aishwarya and her little daughter Aaradhya opted for silver lehengas for the Laxmi puja while Abhishek wore a grey-coloured kurta pyjama set. Amitabh and Jaya Bachchan complemented each other in golden. She wore a beautiful golden sari and he was pictured in a kurta pyjama set. "Deepawali ki anek anek shubhkamanayein," Amitabh Bachchan, 76, captioned one of his posts, which is a picture of the entire family performing puja. In another post, they can be seen lighting sparklers. "Diwali brightness ever," wrote Big B.

Aishwarya shared these two pictures and wished everyone a very happy Diwali. How cute is Aaradhya?

A post shared by AishwaryaRaiBachchan (@aishwaryaraibachchan_arb) on Nov 7, 2018 at 8:49am PST

HAPPY DIWALI TO ALL

A post shared by AishwaryaRaiBachchan (@aishwaryaraibachchan_arb) on Nov 7, 2018 at 8:56am PST

Wishing you all a very happy and prosperous Diwali!

After Thugs Of Hindostan, Amitabh Bachchan will be seen in Brahmastra, which releases next year.