Disha Patani Shares Another Postcard-Worthy Pic From The Beach 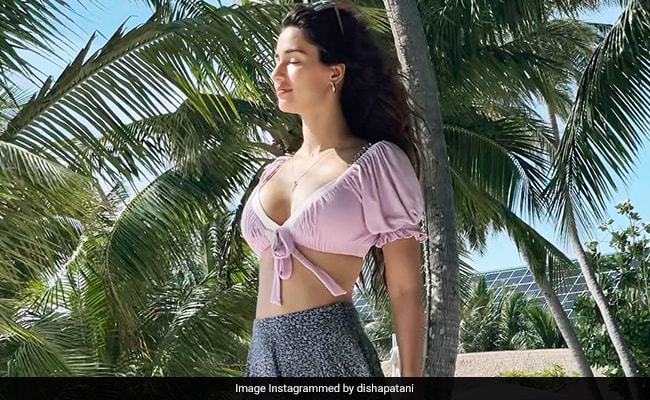 Disha Patani , who loves travelling and vacationing at beach locations, has been updating her profile with stunning pictures of herself. We are not complaining at all. After “random” snaps of herself chilling in swimsuits on the beach and in swimming pools, Disha treated her fans to yet another photo of herself posing in the sun on a vacation. It is beautiful. Wearing a lavender crop top along with printed black shorts, the actress is seen soaking up the sun on the beach. She completed her look with a pair of sunglasses and gold earrings. As soon as Disha Patani posted the picture, her fans flooded the comments section with compliments. “Very cute,” wrote one user while another commented, “You are so gorgeous.”

If you have been following Disha Patani on Instagram, you must be familiar with her love for beaches. Every now and then, she posts breathtaking photos of herself and leaves her fans mesmerised. Over the weekend, the actress took the Internet by storm after she shared pool and beach pictures with the caption, “Random.” Take a look:

A beauty in red – that's how you define this photo album by Disha Patani.

Also, take inspiration from Disha Patani on how to update your vacation wardrobe. Her white swimsuit is a must for beach holidays. Agreed?

Disha Patani is currently prepping for Sagar Ambre and Pushkar Ojha's Yodha. The film stars Sidharth Malhotra in the lead role. The actress shared his new look posters last week. The film will release in July 2023. Check them out here:

Disha Patani is best known for her work in films such as Baaghi 2, Malang and Kung Fu Yoga, among others. She entered Bollywood with the 2015 sports biopic MS Dhoni: The Untold Story, in which she shared screen space with late actor Sushant Singh Rajput. The actress was also seen alongside Salman Khan in Bharat and Radhe: Your Most Wanted Bhai.