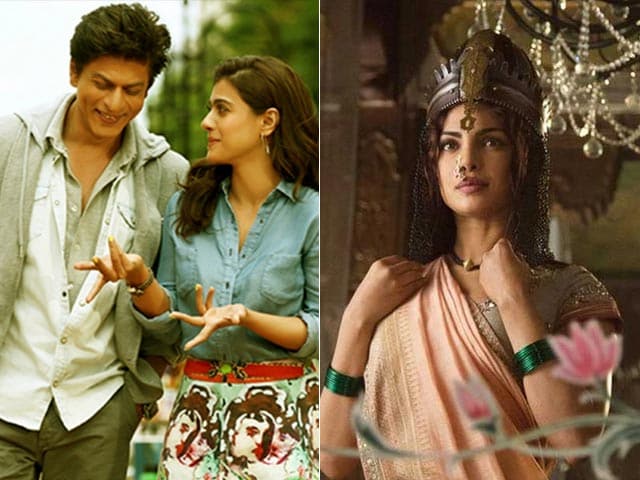 Stills from Dilwale and Bajirao Mastani

Mumbai: It takes two to tango, but two big-ticket films arriving in theatres is hardly a good thing. Pegged as the biggest box office clash in years, Rohit Shetty's action comedy Dilwale will compete with Sanjay Leela Bhansali's period drama Bajirao Mastani on December 18. And while actors of the two films have labelled it 'unfortunate' or admitted to be nervous about it, the makers are in no mood to choose a different release date. (Also Read: Shah Rukh Khan Says Dilwale vs Bajirao Mastani is 'Not Good.' Here's Why)

This has now led to a fight for maximum screens, say industry sources. "The makers of both films are trying to get more screens than the other. These days, once the filmmakers decide the release date, they don't give it up even though it is slated to clash with another big-budget film. While Bajirao Mastani and Dilwale will cater to diverse segments of the audience, the buzz for the latter is slightly better since it is a mass entertainer," says a trade source.

Distributor Anil Thadani insists that neither of the two makers has started booking screens. "It's premature to comment since they have not set the screen space so far. I am sure both films will have a wide release and survive on their own merit," he adds.

Another city-based distributor, requesting anonymity, says that Eros International, which is backing Bajirao Mastani, has booked most single screen theatres and maximum shows in multiplexes across the country. "In India, 50 per cent screens are with pan-India multiplexes while 25 per cent are with individual multiplexes. The rest are single screens. In a lot of business territories, Dilwale is the hot choice while Bajirao Mastani, being a period drama, is likely to find only limited audience," he explains.

Thadani agrees that maximum business is generated from multiplexes, but argues that the possibility of Eros having already booked single screens across India is low. "But, eventually, Dilwale is a big film and it's not possible that it won't get the (number of) screens (it is aiming at)," he says.

While there's no denying that the audience and business will get divided, trade expert Taran Adarsh feels that two films can' co-exist if they are good. "As per the trade buzz, however, Dilwale will have an upper hand. So, let's wait and watch," he quips.

Exhibitor-distributor Akshaye Rathi says Shah Rukh has more fans than the combined following of the Bajirao Mastani star cast, so Dilwale is bound to be a blockbuster. "But Bajirao Mastani is also a big film in terms of production and star cast, a movie with a lot of commercial appeal. It could have gone off to a flying start if it had got a solo release, and surely, its business will get hampered now. I also feel both the film can hold their own ground. Going by the screen race, it will be balanced. I feel the clash is being blown out of proportion," he says.

Rakesh Upadhyay of White Hill Productions, which distributes films overseas, says Dilwale might have an edge over Bajirao Mastani even though Eros has pre-booked the single screens. "As far as the overseas market is concerned, no one can beat SRK. However, both films should do well since they are releasing in the pre-Christmas weekend and have enough time to cash in on the festive frenzy," he adds.

This is what the star cast of both films have said about the impending clash in recent interviews:

who plays the lead in the multi-starrer 'Dilwale'
It is unfortunate that both the films are coming together. I feel bad when other films come with mine. But I wish both of them are successful. I believe we are going through a time where two films releasing together can do good. Lagaan and Gaddar were successful too. So hopefully it'll be good. It (Bajirao Mastani) will be a beautiful film, ours is good too. Priyanka Chopra,

who plays Kashibai in Bajirao Mastani
Both the films will do well as both are different from each other. It is unfortunate that both the films are coming together. I am hopeful that both will do well. I wish luck to the team of 'Dilwale'.

who plays Mastani in Bajirao Mastani
I didn't call Shah Rukh to sort out the Dilwale-Bajirao Mastani clash (contrary to reports). I have a personal equation with Shah Rukh. I would never do something like that. The only thing you can do is do your part with honesty and conviction and leave the rest to professionals like the producers and director to take the call.

who plays Peshwa Bajirao I in Bajirao Mastani
Be it SRK-Kajol or Ranveer-Deepika, every pairing has its own charm and legacy. It won't be right to compare them.