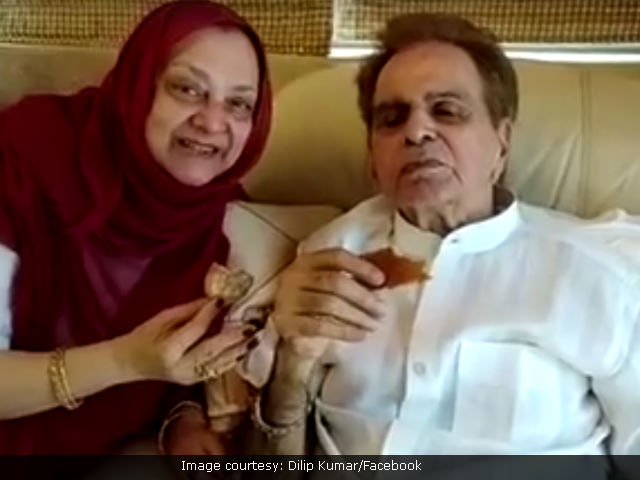 Dilip Kumar and Saira Banu in a still from the video. (Image courtesy: Dilip Kumar)

New Delhi: Veteran actor Dilip Kumar is now on Facebook. On Wednesday, The Mughal-E-Azam actor announced in a tweet that he joined Facebook because his fans "desired" so. He tweeted: "Aap ki khwaishaat ki bina par meine Facebook account aaj se shuru kar diya. Based on your desire, I've setup a Facebook account today. (sic)" In another tweet he shared the URl of his facebook page, which as of now has not been verified. Dilip saab shared a video message with his fans in which he complained of an "irritating pain in lower back." He also said that "A refreshing cup of tea is always welcome." The actor was accompanied by his wife, former actress Saira Banu.

Dilip Kumar's health keeps fluctuating and the actor has been hospitalized several times in the last few years. In December, he was hospitalized after he complained of swelling in his right leg and fever.

Dilip Kumar was recently given Living Legend Lifetime Award from Punjab Association. The actor shared pictures from the felicitation, which took place at his home. Here are some pictures Dilip saab shared.

Promoted
Listen to the latest songs, only on JioSaavn.com
The 94-year-old actor was debuted in Bollywood in 1944 film Jwar Bhata and won film critics with his performance in films like Jugnu, Andaz, Devdas, Naya Daur, Madhumati, Shakti and Ram Aur Shyam to name a few. He was last seen in 1998 film Qila.

Dilip Kumar received the Padma Bhushan in 1991 and the Dadasaheb Phalke Award in 1994.