Dil Bechara Title Track: Friend-Zoned Sushant Singh Rajput Singing His Heart Out Will Make You Fall In Love With Him 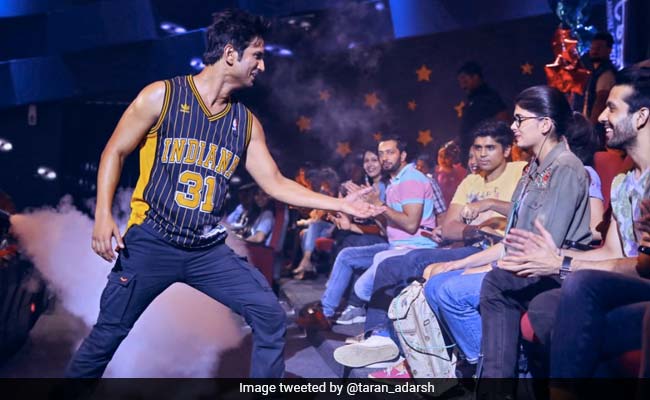 The title track of Dil Bechara perfectly describes the film's title, courtesy Sushant Singh Rajput's brilliant one-shot performance. Sushant's Dil Bechara co-star Sanjana Sanghi dropped the Dil Bechara title track on Friday, making us fall in love with Sushant all over again. Dil Bechara stars Sanjana as Kizie Basu and Sushant as Manny, whose magical love story has a tragic end - Kizie has cancer. The trailer reveals that Manny, with his adorable antics, lights up grumpy Kizie's life, and the title track is a glimpse of Manny's infectious energy. While sharing the Dil Bechara title track, Sanjana tweeted: "Manny knocked his way into Kizie's life with all his heart and lively spirit... Listen, love, let the magic do its trick."

The song begins with the spotlight on Manny at what appears to be a college performance. Manny, who appears to have been friend-zoned, dances to the tunes of his heart and sings out his emotions adorably. Kizie has just a tiny role to play during Manny's performance as he randomly grooves with her in the audience. The song ends with Sushant's million dollar smile, which will steal your hearts.

What makes the Dil Bechara song all the more special is AR Rahman's dreamy voice. Watch the song here:

In an Instagram post, Farah Khan, who choreographed Sushant in the Dil Bechara song, revealed that the actor had filmed it in one shot: "This song is particularly close to me because it was the first time I was choreographing Sushant... we were friends for a long time but never worked together... I had also promised Mukesh Chhabra that when he makes his directorial debut I would do a song for him... I wanted the song to be done as a one shot song because I knew Sushant would be able to do it perfectly."

This song is particularly close to me because it was the first time i was choreographing Sushant.. we were friends for a long time but never worked together.. i had also promised Mukesh chhabra that whn he makes his directorial debut I would do a song for him.. i wanted the song to b done as a 1 shot song because i knew Sushant would b able to do it perfectly.. i remembred Sushant had once come to a reality dance show that I was judging as a celebrity guest and that's the only time the celebrity guest danced better than the contestants on that show.. we rehearsed a whole day n then finished shoot in half a day ! As a reward for nailing it perfectly all Sushant wanted was food frm my house which i duly got for him..i see the song n all i can see is how Alive, how happy he looks in it.. yes this song is very special to me.thank u @castingchhabra for including me on this journey.. https://bit.ly/DilBecharaTitleTrack

Dil Bechara, which marks the directorial debut of casting director Mukesh Chhabra, is an onscreen adaptation of John Green's book The Fault In Our Stars, which was also made into a Hollywood film.

Dil Bechara will premiere on Disney+Hotstar on July 24 for subscribers and non-subscribers.