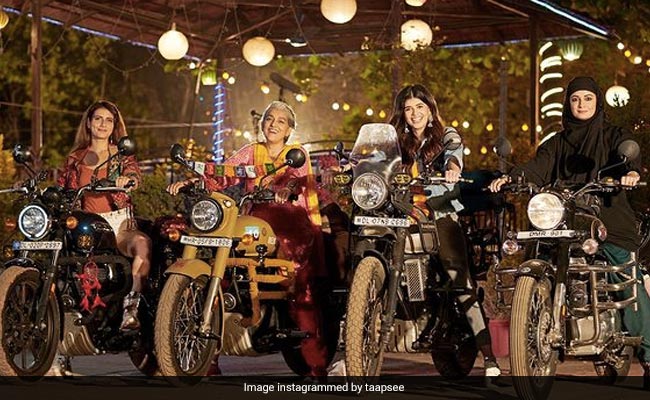 As an actress, Taapsee Pannu is known and celebrated for the strong women characters she portrays in films primarily headlined by her. With Taapsee having stepped into the realm of production, it looks like her resolve to tell stories led by women has only strengthened. Months after announcing her production banner Outsiders Films and sharing details of the first film, Blurr, to be helmed under it, Taapsee is back with another announcement. In a post on Instagram, Taapsee stated that she has joined hands with Viacom18 Studios and BLM Pictures to tell the story of four women in Dhak Dhak.

Veteran actress Ratna Pathak Shah, Dia Mirza, Fatima Sana Shaikh, and Sanjana Sanghi play the protagonists in the film. The announcement post involves a picture of the four women seated on bikes, ready to begin an adventure. While Fatima is dressed in a top and shorts, Ratna Pathak is seen in a salwar. Meanwhile, Sanjana is dressed in denim pants and Dia's character is in a salwar with a hijab. What do they have in common? Their comfort and confidence while sitting on the bike.

Sharing the news, Taapsee Pannu wrote, “Join the ride of a lifetime with Dhak Dhak, as four women ride to the highest motorable pass in the world on an exciting journey of self-discovery!” tagging the lead actress and the team of the film.

Colleagues and fans congratulated the Pink star and conveyed their love and blessings. Taapsee's Mulk director Anubhav Sinha said, “Zindabad.” Writer Kanika Dhillon, who has worked with Taapsee in Haseen Dilruba, said, “You're on fire! Onward n upward my friend!”

Dia Mirza reshared the same image and caption. She added, “So excited about this new journey.” Neha Dhupia replied to the post by saying, “All the best,” with a heart emoji. Sangeeta Bijlani wrote, “All da best, Dia.”

Sanjana Sanghi too shared the same image and wrote, “Months of prep later, so excited to finally get to share this crazy ride with you all! Here's bringing to you our next, full of love, laughter and adventure.”

Speaking about the film, Taapsee Pannu said in a statement, “We have attempted to give audiences a visual experience that they have rarely seen on screen. Dhak Dhak narrates the story of four women who realise that freedom has to be owned and never given. Viacom18 Studios has been a crucial part of my journey in the film industry from Chashme Baddoor, Shabaash Mithu and now to Dhak Dhak. I am sure that this ride will be an enriching one.”

In terms of acting, Taapsee Pannu will be seen in a bunch of exciting projects including Shabaash Mithu, Dunki, Dobaaraa, Blurr and Tadka.

"I Hope He Is Proud Of Me": Ranbir Wishes His Dad Rishi Kapoor Was Alive To Watch Shamshera