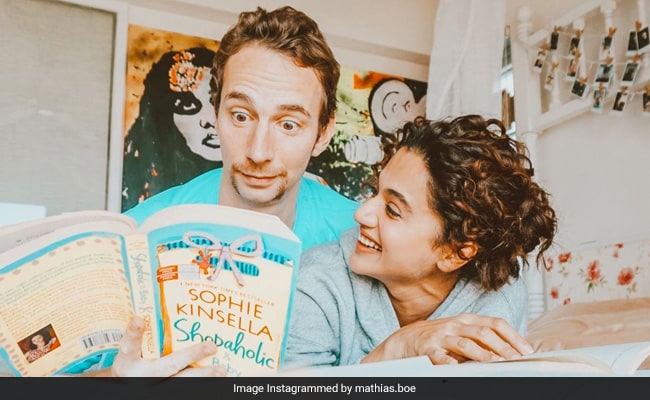 Taapsee Pannu is now a producer. The actress, on Thursday, announced her production house titled Outsiders Films in collaboration with producer Pranjal Khandhdiya. In a series of posts on Instagram and Twitter, Taapsee shared what inspired her to become a producer and also announced her first production - Blurr. However, it was her boyfriend and former badminton player Mathias Boe's comment on her post that cracked the Internet up. He wrote: "I'll do a movie for free. Hit like if you wanna see me in a Bollywood movie." LOL. In her first post announcing her production house, Taapsee wrote: "Last year when it was almost a decade since I plunged into the dream this Indian Film Industry is, I never knew I will not just float but actually learn to swim my way through. For someone who never dreamt of being a public figure I am forever grateful to everyone who has bestowed so much love and trust in me and my work."

"Time for some payback, because with great power comes greater responsibility. So, wish me luck and I promise to try my best to bring the best, coz the view is the best from the "outside." Writing a new chapter of life, now as a producer with the "Outsider Films." #OutsidersFilms #NewChapter," she added.

Expressing her happiness over collaborating with her friend and producer Pranjal Khandhdiya, Taapsee Pannu wrote: "Here we are! And it all started because of his instinct and belief that this crazy combination is worth exploring. The man who runs the show for "Outsiders Films" while I'm allowed to boss around. Pranjal and I will be treading that thin line between friendship and business together, having each other's back, while we make sure your every rupee on our projects is worth it! Cheers! #OutsidereFilms."

Check out the actress' posts here:

And here's what Mathias Boe commented on her post featuring Pranjal Khandhdiya:

The first project of Taapsee Pannu and Pranjal Khandhdiya's production company will be directed by Ajay Bahl, who is known for helming films like Section 375 and B.A. Pass. The film, titled Blurr, will star Taapsee Pannu and premiere in 2022. "And here's the first one of the slate. The chill to match the thrill! #BLURR!" the actress wrote in her post.

Taapsee Pannu is known for her performances in films like Pink, Baby, Thappad, Badla and Game Over.