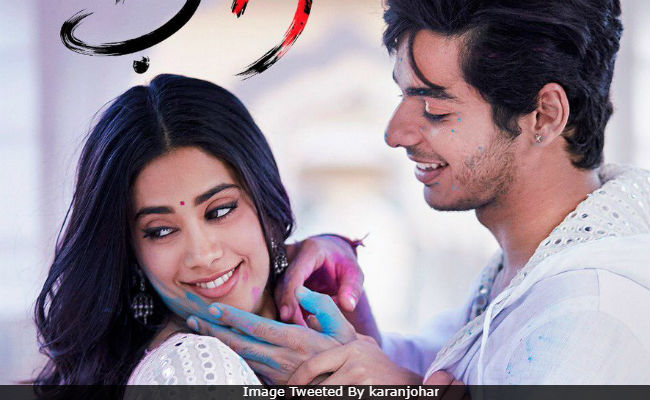 New Delhi: A brand new poster of Janhvi Kapoor and Ishaan Khatter's Dhadak dropped by this evening and it will surely leave a smile on your face. Ishaan smears colours on Janhvi's face, who smiles away. The duo are colour-coordinated in white appear to be totally smitten by each other. With the poster, Dhadak's producer Karan Johar also announced that the film's trailer will arrive soon. "Moments of Dhadak, trailer coming shortly. The magic of immortal love begins. Presenting Janhvi and Ishaan," he wrote while sharing the poster on social media. Dhadak is Janhvi's debut film. It is a remake of National Award-winning Marathi Sairat.

Here's the new poster of Dhadak.

Last year, several posters of the film, featuring Janhvi and Ishaan, were released. Take a look.

Dhadak is directed by Shashank Khaitan. Of the film's plot, he told news agency PTI, "The basic premise (of Dhadak and Sairat) is same. But there are variations. My story is based on another set up. It is (set) in Rajasthan. It comes with its own challenges, conflicts and style of a love story."

Janvhi is the daughter of late actress Sridevi and filmmaker Boney Kapoor. Sridevi died this February in Dubai. When the film was launched, she had visited Janhvi on sets.

Talking about Sridevi's opinion of her film Dhadak, Janhvi, in an interview with Vogue Magazine, told Karan Johar, "She was very technical about it. The first thing she told me was the things I needed to improve - she felt the mascara was smudged and it really bothered her. The second half has to be different, she told me, 'You can't wear anything on your face.' That's all she told me but she was happy."