The latest song from Dhadak, Pehli Baar, is a soulful romantic track 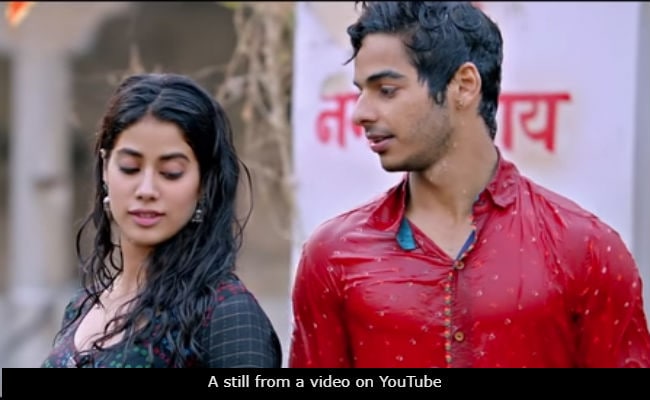 "Pehli baar hai ji pehli baar hai ji, is kadar kisi ki dhoon sawar hai ji" - isn't it just the kind of feeling you have when you are in love for the first time? The latest song from Dhadak, Pehli Baar, is a soulful romantic track, which explains most appropriately the kind of feeling you undergo when you experience the "burst of first love." A moonstruck Madhu (Ishaan Khatter) brightens up after he gets to know that Parthavi (Janhvi Kapoor) is close by. Just to catch a glimpse of the person he is madly in love with, Ishaan goes the extra mile and it turns out to be a 'You jump I jump' kinda situation. Ishaan, who dominates the best parts of the video, can be seen delighted at the prospect of meeting Parthavi, even if it's a fleeting glimpse.

Dhadak producer Karan Johar and director Shashak Khaitan shared the latest track on their social media handles. "The burst of first love! Love is in the air," Karan Johar wrote.

The Burst of first love!!!! Love is in the air!!! #dhadak#PehliBaarhttps://t.co/YOwm8JczbR@ZeeMusicCompany@DharmaMovies#ishaan@janhvi#Ajayatul@ShashankKhaitan

Janhvi Kapoor appears much later in the video but makes sure she makes her presence felt. The music of Pehli Baar has been composed by Ajay-Atul and Amitabh Bhattacharya has written the lyrics for the track. Pehli Baar is a recreation of the Marathi track Yad Lagla, which was also part of the original film Sairat. The makers have also retained the singer of original track Atul Gogavale. The third song from Janhvi Kapoor and Ishaan Khatter's Dhadak is brimming with the innocence of first love.


Promoted
Listen to the latest songs, only on JioSaavn.com
The makers of Dhadak had earlier released the title track of the film and Zingaatand both the tracks have gone crazy viral. Be it the enigmatic chemistry of the actors or the catchy numbers, Dhadak has been able to make way to the hearts of million viewers and social media is her to tell the tale. The Dhadak title track has over 46 million views whereas the super fun track Zingaat has 35 million views. Listen to the tracks here.

Dhadak is the Hindi adaptation of the Marathi blockbuster Sairat, which featured Rinku Rajguru and Akash Thosar. Dhadak will be Janhvi Kapoor's debut film, while Ishaan will be seen on the silver screen for the second time - he debuted with Majid Majidi's Beyond The Clouds. The film releases on July 20.