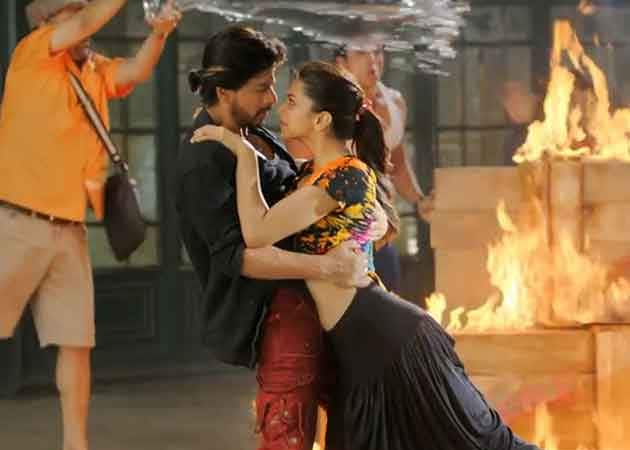 For all diehard romantics, Manwa Laage, the latest song from Happy New Year is a heady concoction of romance, soulful lyrics, an electrifying chemistry between the lead pair of actors, Shah Rukh Khan and Deepika Padukone, with scenes which take one back to SRK's previous hits such as Dil Toh Pagal Hai, Om Shanti Om, Kabhi Khushi Kabhie Gham. The song also does a spoof on SRK's signature dance move, which is replicated by his co-stars Abhishek Bachchan, Boman Irani, Sonu Sood and Vivaan Shah.

The song opens with SRK and Deepika gazing deeply into each other's eyes, the budding romance between them brings a song on her lips and a dance to her steps, which is a stark reminder of the dance sequences between SRK and Madhuri in Dil Toh Pagal Hai. Seventeen years after the movie, King Khan still draws his heroine to him like a magnet. They are surrounded by their Indiawalle group, actors Abhishek Bachchan, Boman Irani, Sonu Sood and Vivaan Shah, but seem to have eyes only for each other.

Their romance amid fire bears an uncanny resemblance to scenes from Om Shanti Om, jogging on rail tracks brings Chennai Express to the mind while the icing on the cake is the spoof on SRK's signature dance move which is emulated wonderfully by the Indiawaale group. There's a Dard-e-Disco moment as well, when SRK's shirt, buttoned down, is on fire revealing his 8 pack abs which could give Salman Khan a run for his money. Deepika, who's role reminds us a bit of Hema Malini in Satte pe Satta, also does a Kajol from Kabhi Khushi Kabhie Gham when she performs puja and distributes parshad among the group.

Promoted
Listen to the latest songs, only on JioSaavn.com
SRK, who's constantly reinvented himself with the times, seems to have found his perfect jodi in Deepika Padukone, star of the new generation of heroines. Manwa Lage puts them into a league of their own.