Deepika Padukone, who is currently awaiting the release of Padmavati, visited Tirumala on Friday afternoon, to seek the blessings of Lord Venkateswara 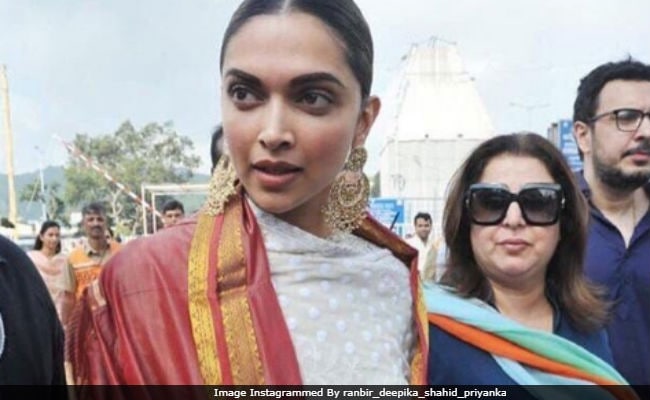 New Delhi: Actress Deepika Padukone, whose upcoming film Padmavati is navigating a storm of opposition to its release, visited Tirumala on Friday afternoon to seek the blessings of Lord Venkateswara. Deepika was accompanied by her filmmaker friend Farah Khan, director of her debut movie Om Shanti Om which celebrated 10 years on Thursday. The Bajirao Mastani actress looked pretty in a white chikankari suit and accentuated her look with gold danglers while Farah was dressed casually in a purple suit. Neither Deepika, Farah nor their respective teams have shared pictures on social media, nor have they revealed why they were at the temple. However, a fan club, operating under the moniker 'ranbir_deepika_shahid_priyanka,' has shared a picture of the duo from Tirumala, which appears to be after the darshan.

Another Twitter user shared a collage of Deepika and Farah.

#Padmavati in the service of Lord of #tirumala@deepikapadukone ..BEST pic.twitter.com/un1xfkhWeU

See this video of Deepika Padukone and Farah Khan coming out of the temple.

Deepika has previously visited Amritsar's Golden Temple, the Dargah at Ajmer and other places of worship.

Deepika Padukone, 31, who was launched by Farah Khan in the Hindi film industry, completed 10 years in Bollywood on Thursday. She debuted opposite superstar Shah Rukh Khan in 2007 film Om Shanti Om, also starring Arjun Rampal and Shreyas Talpade. Deepika played the double roles of Shanti Priya and Sandhya in Om Shanti Om, based on reincarnation.

Farah shared the first picture from Deepika's photoshoot for Om Shanti Om and wrote, "The very 1st photo shoot of @deepikapadukone.. the 1 where i knew shes my Shantipriya."

The very 1st photo shoot of @deepikapadukone.. the 1 where i knew shes my Shantipriya #10yearsofOSO

Her forthcoming film Padmavati, also starring Ranveer Singh and Shahid Kapoor, features her as Rani Padmini of Chittor. Ranveer and Shahid play - Rawal Ratan Singh and Alauddin Khilji respectively. The film has been met with resistance, mistly in Rajasthan, from various groups who are concerned that Padmavati wrongly imputes a romance between Padmini and Khilji - director Sanjay Leela Bhansali has denied this.

Padmavati, which hasn't yet been submitted for certification, releases on December 1.
Comments
deepika padukonedeepika padmavati