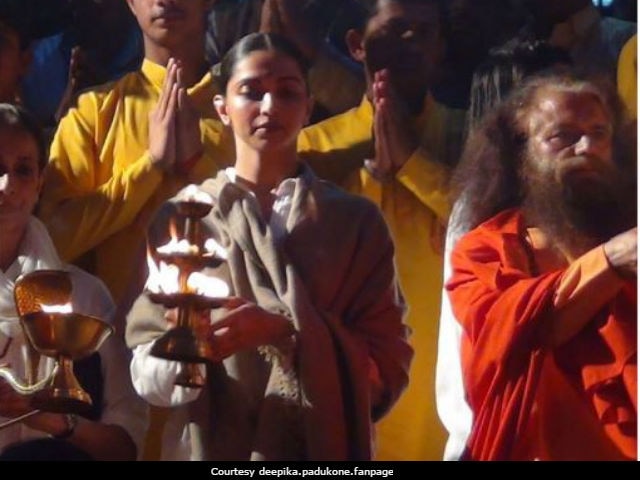 New Delhi: Actress Deepika Padukone was in Rishikesh on Monday when she attended the Ganga aarti with her mother Ujjala Padukone and other relatives. Pictures of Deepika performing aarti with the gurus of the Parmartha Niketan Ashram have been shared on social media and are going viral. In some of the pictures, Deepika feature with Swami Chidananda Saraswati, the head of the ashram with whom Deepika also engaged in a discussion about the cleanliness of Ganga, reported news agency PTI. Swami Chidananda Saraswati welcomed the Bajirao Mastani actress with a rudraksha mala ahead of the aarti. Deepika attended the aarti dressed simply in white kurta and pants and had a shawl wrapped around her.

Deepika can be seen in her various shades in the photos - with folded hands and performing with utmost concentration.

Promoted
Listen to the latest songs, only on JioSaavn.com
Deepika is known to visit Mumbai's Siddhivinayak Temple ahead of the release of her films. Deepika will next be seen in Sanjay Leela Bhansali's Padmavati, the shooting of which has already been stalled more than once. Last month, the sets of Padmavati were vandalised and set fire on in Maharashtra's Kolhapur by an unidentified group of assaulters. The shoot had to be called off and the crew returned to Mumbai after Team Padmavati suffered massive damages to props and costumes. In January, Team Padmavati were shooting in Jaipur, when Mr Bhansali was physically assaulted by a Rajput group called Karni Sena. The attack was to protest against certain alleged scenes in the film featuring Rani Padmini and Alauddin Khilji together, which Bhansali denies to have incorporated in the film. Deepika plays the protagonist in Sanjay Leela Bhansali's period drama and co-stars with Shahid Kapoor and Ranveer Singh. Shahid and Ranveer play the role of Rani Padmini's husband Ratan Singh Rajput and conqueror Alauddin Khilji.