We are loving Amitabh Bachchan's Tuesday posts! Big B picked out his favourite moments from Deepika Padukone and Ranveer Singh's Mumbai reception and shared the tale with his fans and followers in three epic photos on Instagram. Delighting his Instafam with three photos from inside Saturday's party, Amitabh Bachchan hilariously revealed how "the boys" lost the dance battle to Deepika Padukone and Jaya Bachchan and accepted their defeat "gloriously." Amitabh Bachchan began by saying that topping the playlist was Jumma Chumma from Big B's 1991 movie Hum, for which he had taken over the DJ station. And then, for a photo of Deepika and Jaya Bachchan laughing out loud, Big B wrote this: "It's the girls vs the boys at Deepika-Ranveer wedding bash... and the girls are winning... the reactions of Vidya and hubby and Arshad are proof."

Seriously, don't miss the expressions of Vidya Balan, Siddharth Roy Kapur and Arshad Warsi. Big B and Arshad have previously worked together in films like Zamaanat and Tere Mere Sapne while Vidya famously co-starred with the megastar in Paa.

Amitabh Bachchan and Deepika Padukone are co-stars of Piku, which fetched the Best Actor National Award for Big B. Apart from acing the Jumma Chumma steps, we are also sure Deepika knows the lyrics of the song by heart because remember how smoothly she recited them in Yeh Jawaani Hai Deewani? We are talking about the scene in which Ranbir Kapoor and Aditya Roy Kapur were trying to wake Kalki Koechlin up during their trip to Manali in the film. Later in the movie, Ranbir also refers to Deepika as a "Bachchan" fan.

Meanwhile, Ranveer is a self-proclaimed fan of Amitabh Bachchan (who isn't anyway?). At NDTV's Indian Of The Year Awards in 2015, Ranveer had said: "I am a Hindi film fan first, then an actor. And if you are a Hindi film fan, you are an Amitabh Bachchan fan. Ranveer, had joined Big B on stage when the legendary actor was honoured with the Lifetime Achievement Award. Ranveer had also said: "I told him 'I am the seed you had sown several years ago'," and jokingly added that he would like to make these sequels - Shahenshah 2, Toofan 2 and Do Aur Do Paanch Do. LOL. Earlier this year, Ranveer tweeted to say that he received his ultimate "award" after Big B sent him flowers and a note for his performance in "Padmaavat."

Here are the pictures that Amitabh Bachchan shared on Tuesday. The third photo in the series is to show just how "gracefully" Big B and Ranveer lost to Team Deepika Padukone.

DJ'ing the JUMMA CHUMMA with Deepika and Ranveer at their wedding celebration.. !!!

It's the girls vs the boys at Deepika-Ranveer wedding bash .. and the girls are winning.. the reactions of Vidya and Hubby and Arshad are proof

Before the party began, Amitabh Bachchan, Shweta, Aishwarya and Jaya Bachchan set the flashbulbs popping in the photo-op area. 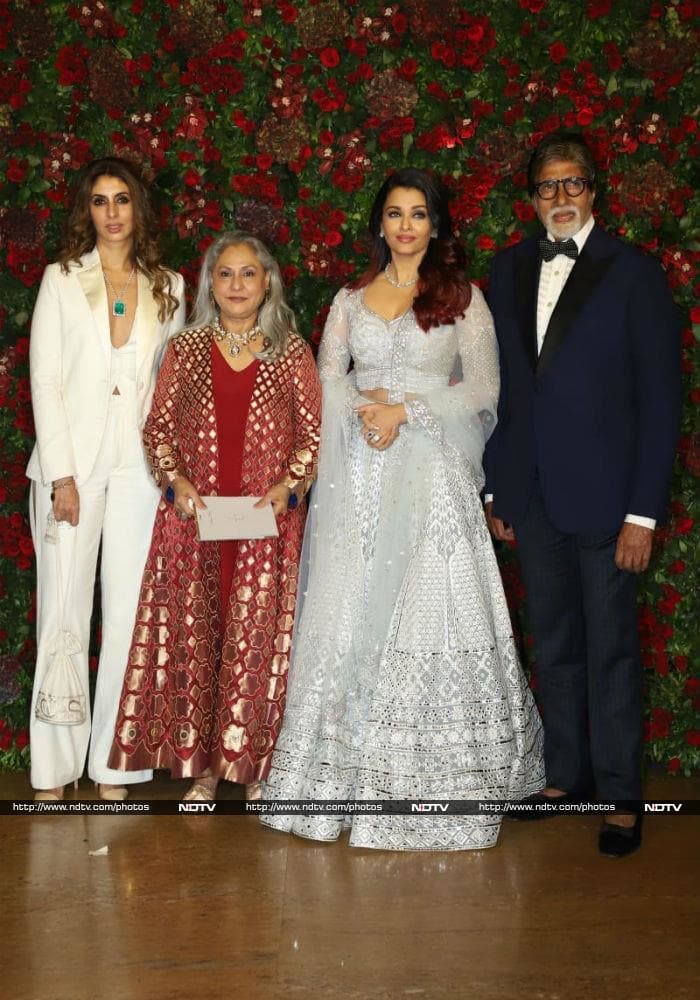 The Bachchans at DeepVeer's Mumbai reception

Soon after the Mumbai reception wrapped on Saturday, a video of Ranveer and Big B dancing to Jumma Chumma did the rounds on the Internet. Fan-clubs also shared more photos of the bride and the groom greeting the Bachchans and inviting them to the dance floor.

Not just with Big B, Ranveer and Deepika also let their hair down with Shah Rukh Khan and danced to the King Khan's song Chaiyya Chaiyya.

Deepika Padukone and Ranveer Singh had two wedding ceremonies in Italy's Lake Como in November and wrapped their wedding festivities with a blockbuster reception on December 1. The star-studded Mumbai reception was also attended by Kareena Kapoor, Katrina Kaif, Anushka Sharma, Jacqueline Fernandez and others.