Deepika, super chic in distressed shorts and a white tee, can be seen sharing a light moment with Siddhant on their boat ride to Alibaug 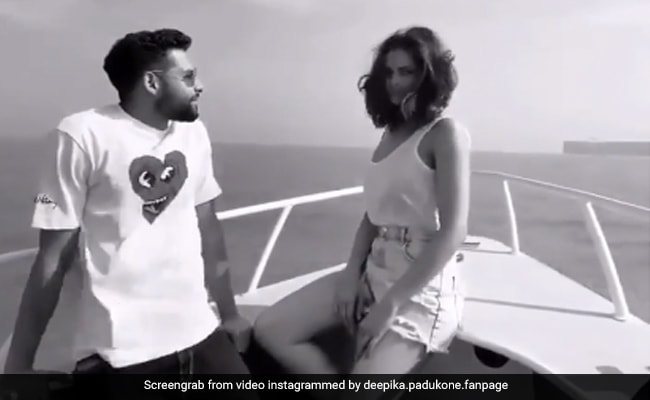 Deepika and Siddhant in a still from Instagram story (courtesy deepika.padukone.fanpage)

Deepika Padukone and Siddhant Chaturvedi have been travelling to and fro between Alibaug and Mumbai for their new film with Shakun Batra. Deepika and Siddhant, who will co-star for the first time, make a promising onscreen pair and fans are super excited about their new venture. However, till the untitled relationship drama makes it to the big screen, glimpses of Deepika and Siddhant's real-life chemistry can be seen moments shared on Instagram from their Alibaug shoot diaries. In the latest one, shared by the film's team member and in-turn Deepika on her Instagram story, she and Siddhant can be seen vibing to the song POV by Ariana Grande.

Deepika, super chic in distressed shorts and a white tee, can be seen sharing a light moment with Siddhant on their boat ride to Alibaug. "Good vibes only," it said. The Shakun Batra movie also stars Ananya Panday, who too often accompanies Siddhant and Deepika on the Alibaug schedule.

Earlier this week, Siddhant Chaturvedi shared a few photos of his fellow "sunset lovers" enjoying the gorgeous view from their ride to Alibaug.

Meanwhile, Deepika trended a great deal for this photo shared by Ananya Panday on her Instagram story: "I love you, Deepika Padukone. The only person I hug," she wrote.