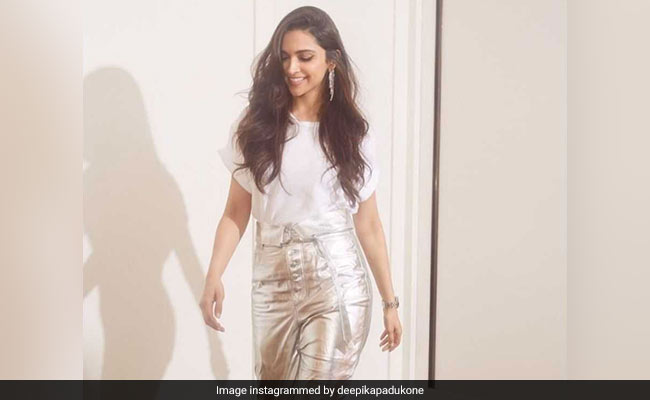 The Ranveer-fication of Deepika Padukone's wardrobe continues. Deepika wore a pair of futuristic silver pants to a Tissot event and neither she nor husband Ranveer Singh (he called them 'patloon' in one comment) can get over them. "There's no such thing as too much bling," Deepika captioned her white tee-silver pants-silver heels outfit, brightening up Ranveer's Monday (as she did ours) and thrilling his OTT heart. "Taught her well. Whaat-ay good Sindhi "Bahu," Ranveer preened in the comments thread. The Internet thought him hilarious; Ranveer's Band Baaja Baaraat co-star Anushka Sharma also cracked up, leaving an emoji in reply to his comment.

there's no such thing as too much bling!

Ranveer Singh was also as taken with The Dimpled One's dimples as the rest of the world. In a separate post, in which Deepika could be seen smiling, the actor wrote: "Dil le gaye dimples tere." Check out Deepika Padukone's post and Ranveer's comment here:

Didn't that just make your Monday a little less blue? It certainly did ours.

On the work front, Deepika Padukone recently wrapped the schedule of Meghna Gulzar's Chhapaak while Ranveer Singh also has Karan Johar's Takht in the pipeline. The couple will also be seen sharing screen space in Kabir Khan's '83, a film on India's 1983 World Cup win. Ranveer stars as squad captain Kapil Dev and Deepika has a small role as Kapil Dev's wife Romi. It will be their first film together after their wedding last year, and fourth in total - they have already co-starred in Ram-Leela, Bajirao Mastani and "Padmaavat."