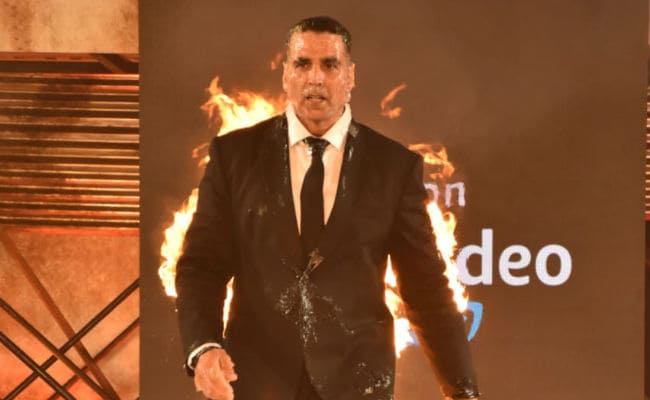 Akshay Kumar at an event for The End in Mumbai.

Akshay Kumar should have known better than to "set himself on fire" for the announcement of his first web-series, the working title of which is The End. The actor's wife Twinkle Khanna, a humour columnist and author of three bestsellers, added her comedy-infused comment on Akshay's daredevil act at the launch of the web-series. "Crap! This is how I find out that you decided to set yourself on fire! Come home and I am going to kill you - in case you do survive this! #GodHelpMe," read Twinkle's post. Akshay Kumar, also known as Khiladi of Bollywood, left no stone unturned to ensure his debut in the digital space goes unnoticed.

Crap! This is how I find out that you decided to set yourself on fire ! Come home and I am going to kill you-in case you do survive this! #GodHelpMehttps://t.co/K7a7IbdvRN

Akshay Kumar occupied a spot on Tuesday's list of trends first for the new posters of his upcoming film Sooryavanshi, then for a song from his soon-to-release film Kesari and finally, for the announcement of the aforementioned web-series.

Speaking about The End, Akshay Kumar said in a statement: . "The digital world excited me and I am delighted to make my streaming debut with this show. If I were to make a small confession here, it was my son Aarav who suggested that I make my digital debut as that's what the youth is hooked onto. On this medium, I want to create something extraordinary and connect with them".

As of now, Akshay Kumar is awaiting the release of Kesari on March 21. The actor has also signed up for Housefull 4, Good News and Mission Mangal.