"Dayum!": Abhishek Bachchan On Being Reminded That He Did This Long Before Ranveer Singh

Abhishek Bachchan hinted that something interesting may be on the way: "Time to crank out some fresh track!" 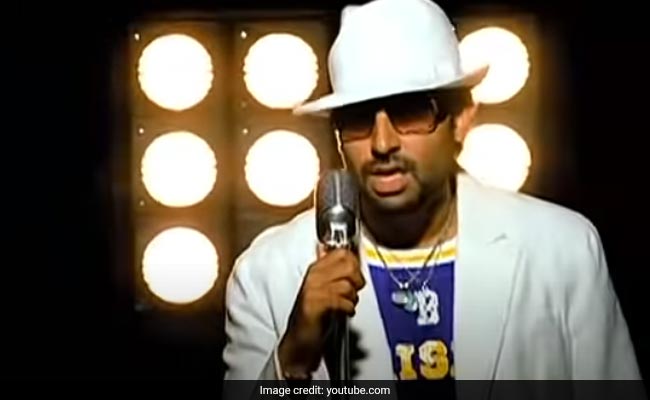 Abhishek Bachchan in a still from Bluffmaster! (courtesy YouTube)

"Ek main aur ek tu hai aur hawa me jadu hai..." Remember Abhishek Bachchan's rapper persona from the Bluffmaster! movie song Right Here Right Now? Abhishek was just reminded by a fan that he rapped like a boss onscreen long before Ranveer Singh impressed everyone with his rapping skills in Gully Boy. Responding to the fan tweet, Abhishek wrote: "Dayum! That long huh?" and hinted that something interesting may be on the way: "Time to crank out some fresh track!" The fan shared a clip from the song Right Here Right Now, which also stars Priyanka Chopra, who was Abhishek's co-star in 2005 movie Bluffmaster!. While Sunidhi Chauhan sang the portions featuring Priyanka Chopra, Abhishek did the rapping himself. Abhishek Bachchan is currently in Mumbai's Nanavati Hospital for being COVID-19 positive.

Dayum! That long huh? Time to crank out some fresh track!!!

In Bluffmaster!, Abhishek played a conman and rapped only in the song. But in Gully Boy, Ranveer featured as a budding rapper, who rose to prominence in the hip-hop scene in Mumbai. Ranveer rapped in the songs Asli Hip Hop, Mere Gully Mein, Apna Time Aayega, among others, for the movie, which was selected as India's official entry for Oscars 2020. Meanwhile, Ranveer has also launched his music label IncInk, which introduces budding rappers. He recently released a new song titled Mehfil-E-HipHop by Abhay Prasad aka Devil The Rhymer.

Abhishek Bachchan will next be seen in Bob Biswas, a film based on the antagonist in Kahaani. It is being produced by Shah Rukh Khan's Red Chillies Entertainment. The actor also has The Big Bull, Ludo and Gulab Jamun in the pipeline.