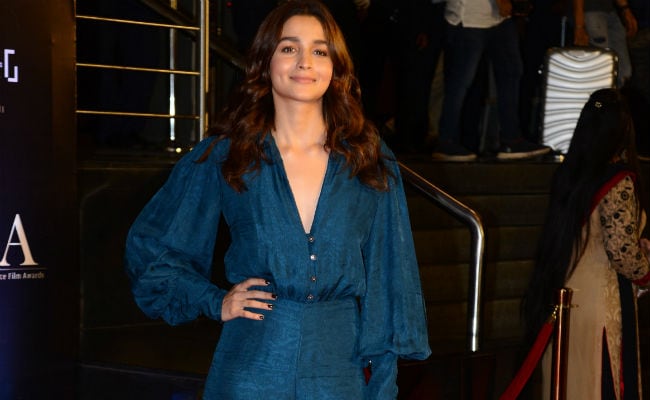 Alia Bhatt at the Critics Choice Film Awards in Mumbai

After her victory at the Filmfare and Zee Cine Awards this year for her notable performance as a spy in Meghna Gulzar's directorial Raazi, Alia Bhatt walked away with the Best Actress Award at the Critics' Choice Film Awards ceremony in Mumbai.

Alia, who opted for a stunning jumpsuit for the gala, took to Instagram to share her look for the ceremony that took place on Sunday.

Surekha Sikri, 74, was felicitated with Best Supporting Actress Award for her portrayal of a nagging grandmother in Badhaai Ho. While receiving the award, she got a standing ovation from the audience. Due to health reasons, she attended the event in a wheel chair. The presenters got off the stage to hand over the trophy to Surekha Sikri, who was beautiful in a green sari.

Bollywood's first stuntwoman Reshma Pathan was honoured with the Extraordinary Achievement Award. Reshma is popularly known as the Sholay girl as she had played Hema Malini's body-double in the cult film.

After the win, Vineet took to Instagram to thank fans and the entire team of Mukkabaaz.

"This award means so much to me and everyone who has worked hard for Mukkabaaz. Thank you so much Anurag Kashyap Sir, Aanand L Rai Sir, my co-actors, all the boxers, my coaches and the entire team of Mukkabaaz," he wrote.

"And last but not least, all my friends and fans who have been pouring their love on me... Let your love flow."

Thank you #CCFA & the jury. This award means so much to me and everyone who has worked hard for Mukkabaaz. Thank you so much @anuragkashyap10 sir, @aanandlrai sir, my co-actors, all the boxers, my coaches and the entire team of Mukkabaaz. And last but not the least all my friends & fans who have been pouring their love on me... Let your love flow #BestActorAward #CriticsChoiceFilmAwards #CriticsChoiceFilmAwards2019 #actor #actorslife #bollywood #bollywoodmovie

The gala was hosted by actress Neha Dhupia but it was superstar Shah Rukh Khan who turned out as the surprise guest of the evening and entertained the attendees with his humour and wit.

In the videos from the extravaganza that have surfaced online, SRK is seen speaking about the craft of cinema.