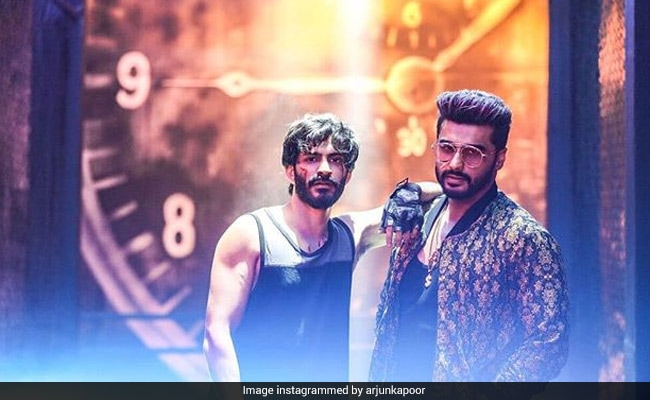 New Delhi: Did you know Arjun Kapoor plays a role in Harshvardhan Kapoor's Bhavesh Joshi. Well, now you know. Arjun recently featured in a special dance number as a promotional song for his cousin Harshvardhan's upcoming movie. Titled Chavanprash, the song was shared on Monday on Arjun Kapoor's social media handles. In the song, the actor features as some-what of an "item boy" and shares the screen with the Dandekar sisters - TV personalities Anushka and Shibani. The song's lyrics can be reviewed as quite a bit unusual and in the most unusual way, it lists down the perks of kisses. On his Instagram feed, Arjun shared a description of sorts for the song and wrote: "Vitamin jaisa har andaz hai, Tere chumme mein Chavanprash hai."

The song is set on a rather flashy set with the look and feel of a typical "item number." But as Arjun sings on about the Chavanprash-like qualities of a kiss, the song also provides a parallel storyline. Harshvardhan aka Bhavesh Joshi can be seen entering a fight club - at first, he appeared hesitant but in the end, he comes out victorious as Arjun leaves the set and the song comes to an end.

In Bhavesh Joshi, Harshvardhan plays the role of a character, who, inspired by his friend's still-in-progress novel, started off fooling around town as the one who delivers justice or insaaf but soon, things took a messy turn and it was time for the Bhavesh Joshi to get serious.

Promoted
Listen to the latest songs, only on JioSaavn.com
Arjun and Harshvardhan reportedly shot the song amidst the wedding festivities of their sister Sonam Kapoor, who is currently in Cannes. Before the song's release, a source told Mumbai Mirror: "Arjun was the item boy much like Chokra Jawan from Ishaqzaade and High Heels from Ki And Ka. Harsh was in his onscreen character so he is not going to be dancing, but Arjun had a blast."

Directed by Vikramaditya Motwane, Bhavesh Joshi releases on May 25.