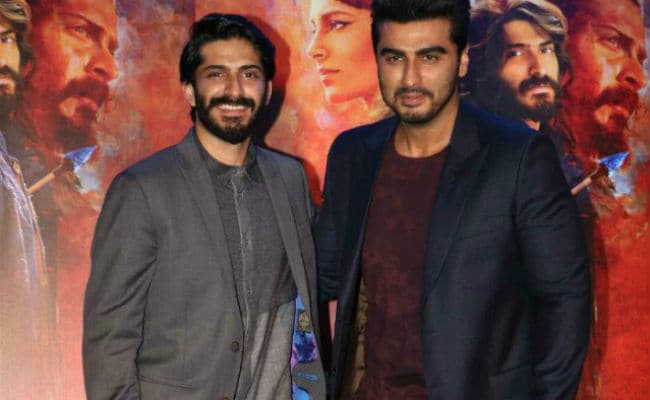 Arjun and Harshvardhan Kapoor are busy with Sonam's wedding festivities

New Delhi: Harshvardhan Kapoor and Arjun Kapoor are currently busy with the wedding festivities of Sonam Kapoor but they sure had time to plan a surprise for Bhavesh Joshi fans. Arjun will reportedly feature in a song in Harshvardhan's upcoming movie Bhavesh Joshi and amidst all the wedding duties for Sonam's shaadi, the actor is said to have taken out time for the song's shoot, stated Mumbai Mirror. Arjun reportedly was on Bhavesh Joshi sets all of Saturday - he was busy shooting the song, reported Mumbai Mirror. Composed by Amit Trivedi, the song will be promotional in nature and is reported to be titled Chavanprash.

The song will reportedly feature Arjun as somewhat of an "item boy" while Harshardhan will be in his on screen persona - as the desi superhero Bhavesh Joshi, a source told Mumbai Mirror: "Arjun was the item boy much like Chokra Jawan from Ishaqzaade and High Heels from Ki And Ka. Harsh was in his onscreen character so he is not going to be dancing, but Arjun had a blast."

Promoted
Listen to the latest songs, only on JioSaavn.com
In Bhavesh Joshi, Harshvardhan plays the role of a character, who, inspired by his friend's still-in-progress novel, started off fooling around town as the one who delivers justice or insaaf but soon, things took a messy turn and it was time for the Bhavesh Joshi to get serious.

Directed by Vikramaditya Motwane, Bhavesh Joshi releases on May 25.