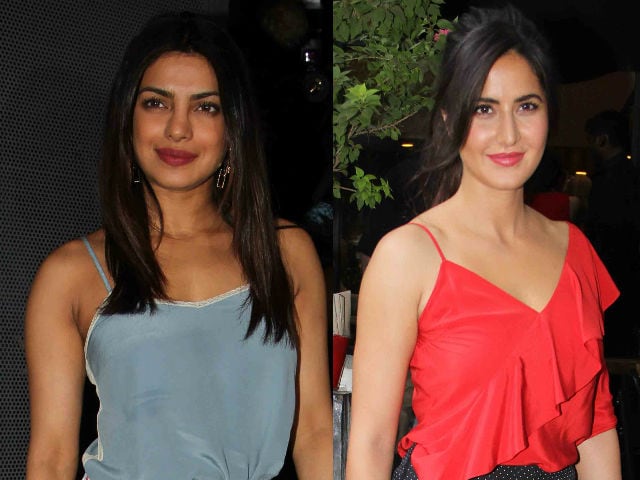 Priyanka Chopra mentions Katrina Kaif in a dialogue from Baywatch.

New Delhi: Katrina Kaif was given a grand Instagram welcome by her colleagues but actress Priyanka Chopra's post is our favourite. Priyanka, 34, posted a snippet from the trailer of Baywatch (Hindi version) in which she says (with truckloads of attitude): "Chalna, Katrina," translation of "Easy, Britney" from the English trailer. We did not miss that neat PR trick, Priyanka. She wrote in caption: "Finally. Welcoming the inimitable @katrinakaif to Instagram #chalnaKatrina into the mad world of social. Hope it's a fun adventure. Xoxo love and luck always. (sic)" Katrina Kaif is exploring the photo sharing app to the fullest, leading to hilarious pictures and captions. In one post, Katrina pranked her followers and in another she gave 'proof' of social media reticent filmmaker, Aditya Chopra's 'existence.'

Finally!! Welcoming the inimitable @katrinakaif to Instagram #chalnaKatrina into the mad world of social! Hope it's a fun adventure! Xoxo love and luck always

Priyanka stars as main (and super chic) villain in Hollywood film Baywatch, co-starring Dwayne Johnson and Zac Efron. Of replacing Britney's name with Katrina's, Priyanka told India Today that it was her "girl love homage" to Katrina. "I couldn't think of anyone else. Britney is such a huge star. So I had to find a modern day icon. I think Katrina Kaif is a major icon for Hindi cinema and I really, really like her," she added.

Promoted
Listen to the latest songs, only on JioSaavn.com
Here's a glimpse of Katrina Kaif Instagram page:

Finding inner peace ... (and information) whilst getting ready #multitasking #onlyanhourlate

Katrina Kaif will be next seen in Anurag Basu's Jagga Jasoos with Ranbir Kapoor. She is filming Ali Abbas Zafar's Tiger Zinda Hai with Salman Khan. Meanwhile, Priyanka has completed filming Quantico season 2 and her film Baywatch will hit the screens on May 25. Priyanka hasn't announced her next Bollywood project yet.