Mame Khan wore a traditional Rajasthani outfit for the Cannes 2022 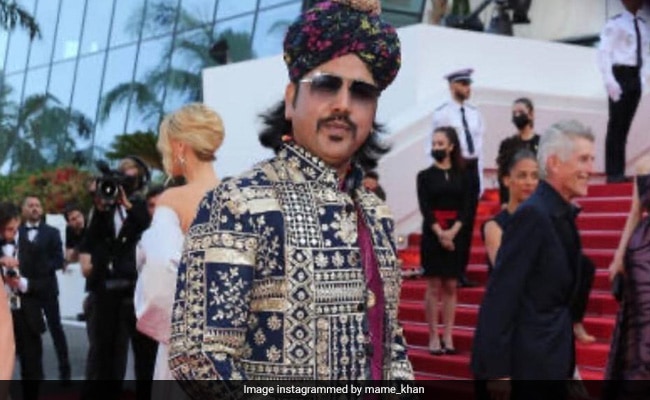 Mame Khan made his debut on Cannes 2022. (courtesy: mame_khan)

Rajasthani singer Mame Khan made history at the 75th Cannes Film Festival by becoming the first folk artist to open the red carpet for India at the event on Tuesday. Led by Information and Broadcasting Minister, Anurag Thakur, Mame Khan was also part of the Indian delegation. For the red carpet, Mame Khan wore a traditional Rajasthani outfit - a vibrant pink kurta set and layered it with an embroidered blue jacket. Designed by Anjuli Chakraborty, he completed his look with a traditional headgear and classy sunglasses. Check out the post below:

For the uninitiated, Mame Khan has sung several songs for Bollywood films, including No One Killed Jessica, Sonchiriya and Luck By Chance. Also, he has featured on Coke Studio with Amit Trivedi.

This year all eyes are on India as it has been named as 'Country of Honour' at the Marche Du Films (Cannes Film Market). Also, this year, Bollywood star Deepika Padukone is one of the jury members. On Tuesday, the actress turned heads in ace designer Sabyasachi's golden-black shimmery saree paired with an off-shoulder sequin blouse. She kept her makeup game on point with kohl-rimmed eyes and dramatic eyeshadow. Check out her look below:

Aishwarya Rai Bachchan, Pooja Hedge, Hina Khan, Helly  Shah and others will also be seen walking the red carpet at the 11-days event. The event kick-started on Tuesday with a grand opening and will be concluding on May 28.