Cannes 2022: Deepika Padukone Is A Sight To Behold As She Steps Out In Black 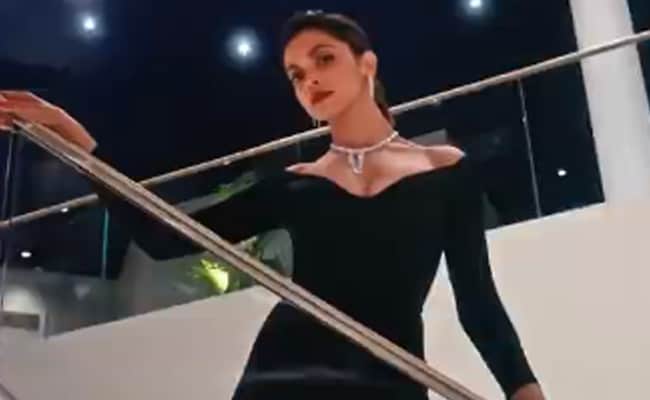 New Delhi: Deepika Padukone has chosen black again for his fifth day at Cannes 2022. The actress, who is also one of the jury members at the Cannes Film Festival, has shared a stunning video on her Instagram handle, giving her fans a glimpse of her OOTD. In the video, the actress can be seen looking gorgeous in a black body cone gown with a plunging neckline. The actress accessorised her look with beautiful Cartier jewellery. She kept her makeup light with red lipstick and styled her hair in a messy bun.

Deepika Padukone has been slaying at the 75th Cannes Film Festival with her fashion sense. In another video, the actress took over the street for a photoshoot in a black turtle neck top with checkered shorts. The actress paired her look with black stockings and loafers. She kept her makeup game on point and tied her hair in a messy pony. The stunning outfit was from the shelves of Louis Vuitton.

In another video, Deepika Padukone is looking gorgeous in a white shirt paired with a bright pink skirt.

A day earlier, Deepika Padukone stole our hearts in a red scarlet gown by Louis Vuitton on the red carpet. She accessorised her look with a statement necklace and kept her hair and makeup on point, as usual.

India has been chosen as the first 'Country of Honour' at Marche du Film (Cannes Film Market). Speaking about her cinematic journey at the inauguration of the India pavilion at Cannes, Deepika Padukone on Wednesday said, "I feel we have a long way to go as a country, I feel really proud to be here as an Indian and to be representing the country. But when we look back at 75 Years of Cannes, I have said earlier also that there have been only a handful of Indian films, and Indian talent that have been able to make it and I feel like collectively as a nation today we have it," news agency ANI stated.

On the work front, Deepika Padukone has several films in her kitty - Pathaan with Shah Rukh Khan and Fighter with Hrithik Roshan.