Cannes 2019: Along with Hina Khan, Diana Penty is also making her debut at the film festival. 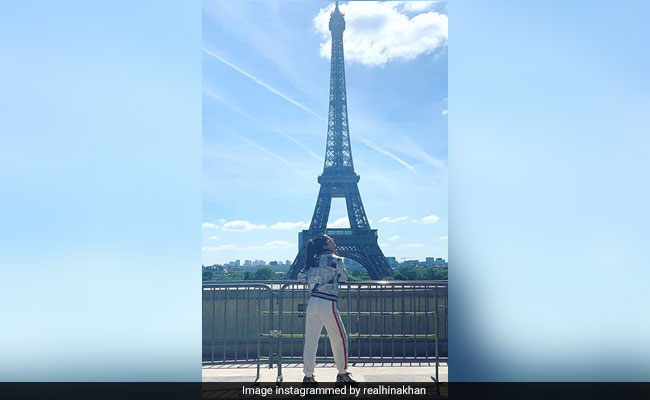 Before making her debut at the Cannes Film Festival, Hina Khan 'restored her energy' in Paris. She recently posted a few pictures on her Instagram and also shared a number of Instagram stories on her way to Cannes, where she was seen to be having a fun time in Paris before heading towards the film festival. She posted pictures of herself from Paris and captioned it: "#JustBe... Restoring my energy... Before it begins." In the pictures, she happened to be posing near the Eiffel Tower, where the day was bright sunny. She was accompanied by her boyfriend Rocky Jaiswal, who featured in a few of her Instagram stories posted from Paris. They travelled to Cannes from Paris on a train, which Hina documented on her social media.

Here is the post she shared before she arrived at Cannes:

The Cannes Film Festival begins today (May, 14) and will continue till May 25. Along with Hina Khan, Diana Penty is also making her debut at the film festival this year. Actresses such as Aishwarya Rai Bachchan, Kangana Ranaut, Sonam Kapoor, Deepika Padukone and Huma Qureshi will also be attending the film festival.

Hina Khan was a part of Ekta Kapoor-directed soap Kasautii Zindagii Kay 2but she temporarily took a few months off from the show to reportedly complete her pending projects. In an interview with Bombay Times, Hina had said: "I am not quitting Kasautii... but I am going on a break for five-six months, as I have given my nod to a movie."

Hina Khan was also the part of Yeh Rishta Kya Kehlata Hai and she was also seen in the reality shows Khatron Ke Khiladi 8 and Bigg Boss 11.