"The stairs of our industry must be accessible to all. Let's climb," Blanchett declared, with some of the rally's participants visibly moved. 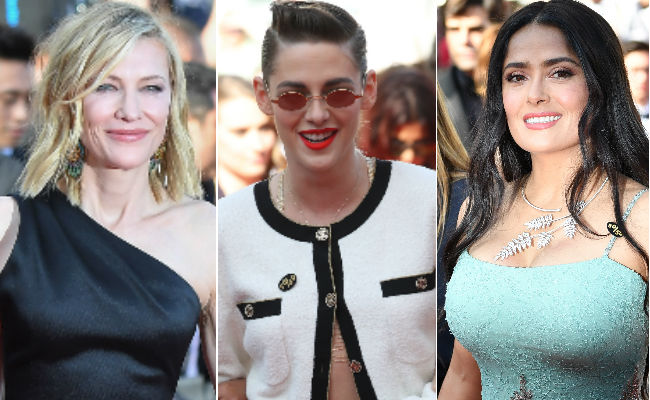 Cannes, France: Hollywood stars including Cate Blanchett, Kristen Stewart and Salma Hayek called Saturday for equal pay in the cinema industry and beyond in a historic red carpet protest at the Cannes film festival. Eighty-two actresses, filmmakers and producers marched arm and arm to demand equality and "a safe workplace", seven months after the world was shaken by the #MeToo movement and the fall of mogul Harvey Weinstein.

The ranks included a battalion of Oscar winners from Helen Mirren and Marion Cotillard to US blockbuster directors Ava DuVernay and Patty Jenkins who made Wonder Woman.

"We demand that our workplaces are diverse and equitable so they can best reflect the world in which we live," said Blanchett in a statement read out with the legendary 89-year-old French director Agnes Varda.

Blanchett, a double Oscar winner, said they wanted "a world that allows all of us in front and behind the camera to thrive shoulder to shoulder with our male colleagues."

With Cannes under fire for its dearth of women directors, the world's top film festival hoped to fend off some of the fierce criticism with the march.

The number of protesters was highly symbolic as it represented the 82 films by female directors who have competed for the top Palme d'Or prize since 1946 - a number dwarfed by the nearly 1,700 male contenders.

The star-studded group stopped halfway up the stairs to the Palais des Festivals to mark the obstacles they face in trying to reach the top.

"The stairs of our industry must be accessible to all. Let's climb," Blanchett declared, with some of the rally's participants visibly moved.

The Australian actress also head the female-majority jury that will decide the festival's top prize.

Several protestors including Stewart made a strong fashion statement by donning suits and tuxedos, in a show of defiance to Cannes' red-carpet dress code which is often denounced as sexist.

Women have been stopped from entering premieres in the past for not wearing high heels.

Producer and activist Melissa Silverstein of Women and Hollywood hailed the event as a "massive milestone towards change".

"An honour to share the carpet with @Ava (DuVernay) and all the other women who are pushing for more opportunities for women," she said in a tweet after the march.

An honor to share the carpet with @Ava and all the other women who are pushing for more opportunities for women. #5050by2020pic.twitter.com/WRaHaP4vqS

The protest took place ahead of the premiere of Girls Of The Sun by Eva Husson, one of only three women out of 21 directors in the running for the Palme d'Or.

The film is the story of the Kurdish Yazidi all-female Sun Brigade who are fighting Islamic State jihadists in Syria and Iraq, where thousands of women were kept as slaves.

The protest comes at the first Cannes festival since the cinema industry was engulfed by the spiralling sex abuse allegations against Weinstein.

Cannes was the scene of several of the disgraced Hollywood mogul's alleged attacks on actresses.

In response, the festival set up an anti-harassment hotline this year.

The number has already received "several calls" since the festival's launch on May 9, said French Equality Minister Marlene Schiappa.

Cannes "must be a safe space for women," she stressed.

Blanchett has criticised Cannes for once again failing to invite more female directors.

"There are many women on the jury but I wish there were more in competition," the Australian-born star told French radio earlier this week.

The 48-year-old has emerged as a key figure in Hollywood's fight against sexual misconduct.

One of the first women to call out Weinstein, Blanchett co-founded the Time's Up movement to support abuse victims.

Her comments echo those of fellow actress Jessica Chastain who served on the jury last year and lambasted Cannes for its "disturbing" depiction of women.

Chastain caused a stir on Thursday when she revealed that she planned to make Hollywood's first big budget all-female blockbuster with a cast including Penelope Cruz and Lupita Nyong'o.

Only seven percent of Hollywood blockbusters were directed by women in 2016.

France has the best ratio among the major film-producing countries with 23 percent of films directed by women.


(Except for the headline, this story has not been edited by NDTV staff and is published from a syndicated feed.)
Comments
Cate BlanchettCannes 2018